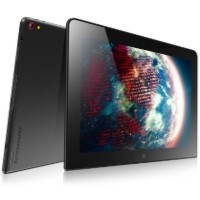 One of the disappointments was that it didn’t come with a stylus for taking handwritten notes in meetings.

Since then, Lenovo has recently released a sister product called the ThinkPad 10. So how does it compare?

In the first of what I hope to be a series of video reviews, here’s a look at the Lenovo ThinkPad 10.

It is based on an Intel Atom processor with a clock speed of up to 2.39GHz.

The screen is 1920×1200 pixels (WUXGA resolution) and comes with a digitzer pen.

The main camera is 8-megapixels and captures 1080p videos, while the front camera is 2-megpixels.

Connectors include one USB 2.0 slot, a combo audio/microphone jack, a microSD card slot (supports up to 64GB), a Micro-HDMI port (for displays and monitors), a keyboard connector, and a proprietary connector used for connecting a keyboard or desktop dock.

This review is based on a test unit borrowed from Lenovo.