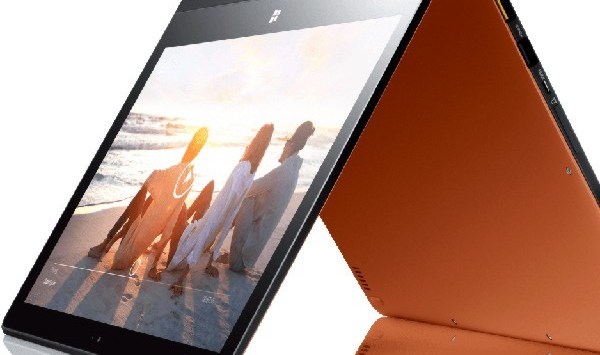 Earlier this year, I did a video review of Lenovo’s ThinkPad 10 tablet.

Aimed at the business market, that tablet comes with a range of accessories including a Galaxy Note-style stylus, a laptop dock, and a desktop dock that make it versatile for a range of business contexts.

Since then, Lenovo has released an ultrathin, small 12-inch laptop called the Yoga 3 Pro. Designed to compete against Apple’s MacBook and Microsoft’s Surface 3.

The keyboard can literally be folded right up against the back of the screen, and Lenovo is marketing the device as being a laptop that is so thin and flexible you can use it as a tablet.

Unfortunately, a number of hybrid devices have proven to be less than fitting substitutes for either a tablet or a proper laptop.

So is the Yoga 3 fit for your business, or does it get the balancing act wrong? It’s time to find out.

It includes 256 gigabytes of storage and 8 gigabytes of memory. It is available in a range of colours, including gold, silver or orange.

A key feature of the new device is its ultra-thin watchband inspired hinge. As Michael Archambault discovered, it’s sturdier than it looks:

Of course, those who have been paying attention know that the most dazzling feature of the latest Yoga Pro iteration is the new Watchband hinge. You heard right, Lenovo has dumped the conventional laptop hinge as we know it and replaced it with a watchband fashioned from 813 individual pieces of aluminum and steel.

When we first received the unit, we were a bit worried about how well the hinge would hold up compared to past iterations. That being said, our fear dissipated as soon as we opened the unit itself. It is almost a feat of awe; the hinge looks like a watchband, you can’t possibly imagine how it keeps the screen up, but it does.

While the stability of the unit’s hinge leaves us with little worry, it should be noted that the screen can move a bit. The hinge itself doesn’t budge, but the point at where the screen connects to the unit can show a bit of give, although nothing to worry about.

In terms of size and thickness, Yahoo’s Daniel Howley says the Yoga 3 is marginally thinner than the MacBook, at the cost of a thinner display:

The Yoga 3 Pro is clearly designed as a competitor for Apple’s 13-inch MacBook Air. In fact, Microsoft is running a television commercial in which the Yoga bend and folds, while the MacBook stays rigid and uptight — I mean upright.

But the Yoga 3 Pro is also competing against Microsoft’s own Surface Pro 3, which is a tablet that can be used as a laptop when connected with its attachable keyboard.

The Yoga and MacBook are pretty close in terms of size, as the MacBook Air is about an inch wider and a hair thicker than the Yoga 3. Both laptops also weigh about the same, with the Yoga 3 Pro at 2.6 pounds and the Air weighing 2.9 pounds.

The Surface Pro 3, for its part, sports a smaller 12-inch display and isn’t as wide as the Yoga or MacBook, but is certainly thicker. It’s also the lightest of the group both with and without its keyboard, 2.4 and 1.8 pounds, respectively.

In terms of performance, Forbes’ Dave Altavilla says the Yoga 3’s performance is fine for most work-related tasks – but high performance graphics and games are a different matter:

The Yoga 3 Pro handled standard computing tasks with ease and was able to keep pace… In gaming and graphics performance, the Yoga 3 Pro’s Core M-5Y70 chip offered more mixed results, displaying performance that blows the average premium tablet out of the water but trails Core i5 designs a bit in some tests. Since machines like the Yoga 3 are generally not targeted as heavy-duty gaming rigs, I would offer performance in this area specifically is plenty robust for virtually all mainstream usage models.

According to Engadget’s Dana Wollman, a big trade-off with such a thin device is in battery life:

All told, the Yoga 3 Pro held up through seven hours and 36 minutes of continuous video playback; that’s about one hour longer than the Yoga 2 Pro lasted. Granted, it pales in comparison to the MacBook Air, which managed nearly 13 hours the last time we benchmarked it, but even so, it’s on par with other super-skinny laptops, like the Acer Aspire S7-392. After a certain point, I suppose, you either need to make room for a bigger battery, or settle for slightly shorter runtime. That’s a reasonable trade-off, but I also wouldn’t want the battery life to be much shorter than this.

Finally, for those who need to type up long reports or documents for work, the good news from Gizmodo’s Campbell Simpson is that the Yoga 3 has a comfortable keyboard:

Even the keyboard is excellent, which is a godsend given the thinness of the notebook and given Lenovo’s storied history in this area. If you don’t mind chiclet keys, the typing experience is excellent. (I typed this entire review on the Yoga 3 Pro, and didn’t stumble nearly as much as usual as on other thin and light laptops.) The trackpad is less brilliant, but a little bit of software tweaking fixes most of its issues quickly.

As long as you’re not expecting to use the Yoga 3 to do high-performance video editing, high-resolution graphics or play the latest games, it should handle most everyday tasks well.

The big concern from a number of reviews is battery life, and if you’re looking for a device that can go a long time without a charge, look elsewhere.

That being said, especially if you’re looking for a device that can be used as both a laptop and a tablet, the Yoga 3 is a good alternative to some of the other hybrids on the market.