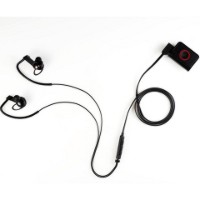 Right now, wearable devices are one of the biggest emerging trends in the tech industry.

A key niche for these devices is among gym-goers and fitness buffs who want to feed their health information and data such as their heart rate into their smartphone or tablet for monitoring.

Overwhelmingly, these devices have been created either as low-end standalone fitness wristbands, or high-end Android Wear smartwatches that also display notifications and take calls.

Of course, since many gym-goers already listen to music during their workout, why not use their earphones to also measure their pulse?

Like many new gadgets, this raises a question: Is it actually a good idea?

There are two key parts of this device. The first is a special set of earphones, with a blood flow monitor in the right ear.

The second is a matchbox-sized clip-on Bluetooth box the earpiece connects to.

According to Engadget’s Mat Smith, the headphones do a good job of monitoring your pulse – but aren’t as good at playing music:

While the headphones make a pretty excellent heart rate monitor, the sound quality is distinctly trebly. Maybe my tastes tend toward Beats-style bass sound profiles, but compared to other in-ear buds, wired or wireless, these don’t pack the same audio punch. My guess is something had to be sacrificed to make space for the heart rate sensors. Worse, at substantial volume there’s a moderate degree of noise leakage. Gyms and outdoor running can often require the top volume, but move into a quieter area with other people and they’ll soon twig to your shameless workout soundtrack — the one you wouldn’t ever make public.

Jessica Van Sack from The Boston Herald questions whether the new device is good value for money, given the sound quality:

LG has started an entirely new product category by deciding to stick heart rate sensors into something you’re already likely wearing while you’re working out. These double-duty headphones are Bluetooth-enabled and connect to an accompanying LG fitness app for iOS and Android. A blood-flow sensor hides directly in the right earbud… The high price is hard to justify with less-than-stellar sound quality. And while these earbuds are hands-free, they’re not exactly wireless, with a controller that needs to be clipped to whatever clothing you’re wearing.

Over at TechHive, Jon Phillips disagrees with the bass problem. Apparently, the issue is that many users don’t push the earpieces far enough into their ears:

It turns out I wasn’t wearing the earphones correctly. You basically have to screw them into your ears, rotating them as far forward as possible in a clockwise motion. If you merely insert them into your ears, without that rotation, you’ll still get heart rate data, but none of that essential bass.

But then there’s the LG Fitness app. As I’ve written before when reviewing wearable technology products, I find the software component of these to be hugely important. If the software sucks, you could have the greatest hardware in the world and it won’t matter.

Things got weird when I went running outside. I ran my standard 2.5-mile route, and the LG Fitness app would record this as three miles or more… Another small annoyance: During the sign-up process I accidentally saved my gender as “Male,” and couldn’t figure out how to change it. It turns out that if you want to change your profile info, you have to deactivate and restart your account.

A big problem with “Swiss Army Knife”-style devices is they attempt to do many things, and do none of them well.

Realistically, most people would be far better off with a proper standalone wristband and a good set of earphones than a single device that fulfils both functions poorly.