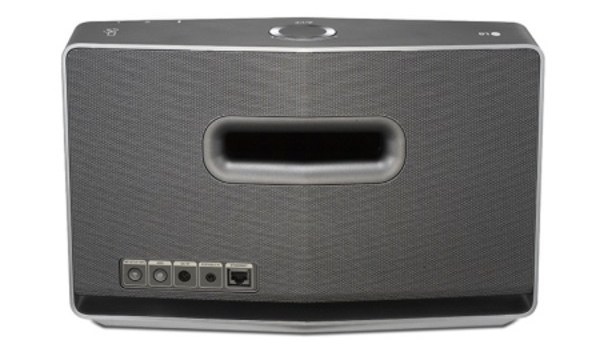 Perhaps it’s because you just bought a new home entertainment system or smart TV, and are looking for a top of the line sound system to complement it. Or perhaps you want to pipe music or audio throughout a store or cafe, but don’t want to bother with speaker cables.

Whatever the case may be, it’s time to invest in a good quality sound system.

In recent years, one of the big moves in this area has been towards multi-room wireless speaker systems that are controlled via computers, smartphones and tablets. And in this area, LG’s entry is its Music Flow system.

So is it time to go with the flow on this one? It’s time to find out.

The LG Music Flow H7 network speaker has a recommended retail price in Australia of $549.

It has an RMS power output of 70W, weighs 4.1kg, uses LG Mesh Network as a streaming format, and supports DLNA servers.

At Expert Reviews, Richard Easton was, for the most part, impressed with the sound quality from Music Flow:

The H7’s 70W drivers produced a surprisingly wide soundstage that had pleasing depth to its sound. Bass is loud and punchy, but it can be overbearing. On certain test tracks this was detrimental to clarity in the midrange and treble, with the sound becoming slightly muddy on certain test tracks that had a lot of low frequency emphasis.

For the most part, however, the sound from the H7 was rich and vibrant and generated the necessary excitement in our rock tracks while adequately producing the instruments in our acoustic tracks. It was also more than capable of filling a mid-to-large size room with sound. Playing high-resolution tracks the audio became even crisper.

However, Easton warns Mac users are likely to face problems:

To set up the H7 you can use the LG Music Flow app available on iOS and Android. There’s also desktop software available for PC, which acts as a media server, but no official software available for Macs, which was disappointing. Instead you can download Nero MediaHome from the LG website if you need to share music from your Mac, although any DLNA media server on PC, Mac or for your NAS will do the job. Instructions for adding the H7 and any other Music Flow speakers to your network are simple to follow and require you to go to each speaker and press the ‘Add’ button to pair it with the R1 Bridge. Within a few minutes you have speakers connected and available to stream to from the app.

At the Financial Review, John Davidson actually got to sit down with one of the engineers responsible for the design. Needless to say, the company itself is aware of some of the issues:

Everything that troubles me about Music Flow – how it’s a tiny bit too slow and tricky to set up, how it lacks the full suite of online music services (there’s no Pandora or Google Play Music All Access support, both of which I consider a must), and how its user experience is a little patchy – this engineer was painfully aware of, and is working on rectifying.

Over at MacWorld, for understandable reason, the limitations with Apple products were a glaring problem for Music Flow. And at the high-end of the market, there are better alternatives.

The H3, H5 and H7 speakers follow the typical small, medium, large speaker offering favoured by multi-room audio systems… Music Flow’s party trick is that built-in NFC (near field communication) lets you tap your phone on a speaker to play music – handy for Android users, but no use to iPhone fans because Apple locks down NFC. You can also use LG’s Home Chat ecosystem when you’re on the road to queue up music so it’s playing when you walk in the front door.

LG Music Flow is feature-packed and flexible, but it can’t match the sound quality of Sonos and Pure.

Gizmodo’s Campbell Simpson says the audio quality is better than most wireless speaker systems, but there’s a hidden cost if you want to use this system wirelessly.

Somewhere along the way, I feel like good sound fell by the wayside when smart, network-connected speakers started getting popular. There are so many Bluetooth speakers out there that just sound OK. I’m happy to report that the entire LG Music Flow range actually sounds pretty damn good, too, and the star of the lineup in the H7 can definitely keep up with its chief competitor, Sonos’s PLAY:5.

Although it does give you troublefree Wi-Fi and a pretty decent coverage range, having to purchase and install the R1 wireless bridge is an extra cost that adds to the overall price of the Music Flow system if you want to use one or more speakers wirelessly. You can connect everything over Ethernet, of course, and that’s probably the best solution if you’re planning a permanent solution, but if you want to go wireless you’ll have to pay a little extra.

If you’re an Apple user, this is one sound system to avoid.

Likewise, even if you only use it with LG’s own devices, it’s likely to be quite fiddly.

While the audio quality will not match what you get in a top-end system from a specialist brand, most reviews say the sound this system generates is both rich and vibrant.

* After this article was originally published, an LG spokesperson contacted SmartCompany to say a software update has been issued for Music Flow that fixed the issue some iPhone users were experiencing.