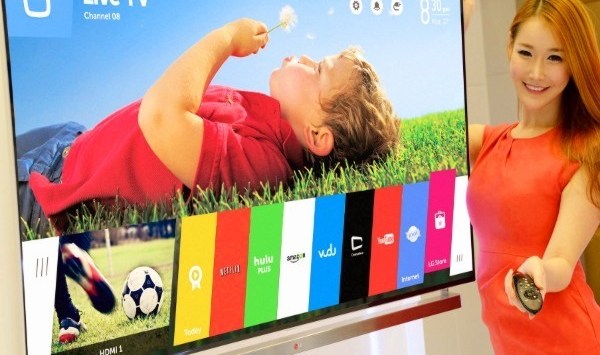 Last week in Control Shift, I took a look at the looming battle for the future of the living room, as smart TVs begin to enter our living rooms over the coming years.

At this stage, it appears most of the major TV manufacturers have aligned behind four smart TV app platforms: Samsung’s Tizen, LG’s WebOS, Mozilla’s Firefox OS and Google’s Android TV.

As with smartphones, smart TVs can run a range of apps. As such, they can do away with the need to plug a range of different devices, such as set top boxes, DVD players or dedicated video game consoles.

This week, we’re going to take a look at one of the platforms vying for control: LG’s WebOS.

WebOS has an interesting history as an app platform.

WebOS was originally developed by PDA maker Palm for its next generation smartphones just as the first iPhones were hitting the market.

It had a slightly different interface to other smartphone app platforms such as Android, Apple iOS, BlackBerry 10 or Windows Phone. Instead of having rows of icons (iOS), widgets (Android) or tiles (Windows Phone), on WebOS you switch between apps by flicking between “cards” that represent different apps.

Unfortunately for Palm, the first smartphones running its platform hit the market just as it was being carved up between Apple, Google/Samsung and Microsoft/Nokia, and the company failed to grab a toe hold.

It was purchased by HP, who harboured ambitions of making a splash in the smartphone and tablet market. However, because most of HP’s customers are Windows users, it ended up doing very little with the technology.

In late 2013, the platform was sold to LG, who adapted it for use on smart TVs. The first TVs running it were displayed at the 2014 International CES trade show in Las Vegas.

At Trusted Review, John Archer explains how it works:

Hit the Smart button on LG’s remote controls and the picture you were watching dims and has the Smart+ TV home screen super-imposed on it. This shows along the top of the screen the input you’re currently watching on the left with the date and time on the right. Also on the right are icons providing quick access to the TV’s settings menus and a list of key inputs – live TV, and the four HDMIs. You can also access all the inputs from here via a dedicated button on the remote, but many people will find the shortened list here very helpful.

Where Smart+ TV really kicks off, though, is along the bottom third or so of the screen. For it’s here that you find a vibrant array of content ‘tiles’, organized like the spines of books on a bookshelf. A number of benefits of this fresh approach strike you right away.

First, it’s brilliantly colourful, catching your eye with its rich array of tile colours so exuberantly that you immediately want to explore what’s on offer. Also impressive is its efficiency. As in, how many content ‘leap off’ points are provided in this relatively small area of screen real estate (leaving you able to continue watching the image behind the menus). Having so many content links available at a glance makes you much more aware right away of just how many content sources your TV has – as well, of course, as streamlining your path to many of those content options.

On CNet, David Katzmaier says that compared to HDMI sticks, set-top boxes and game consoles currently on the market, WebOS is not a game changer:

Smart TVs have always had a big problem: smarter, more capable external devices. Roku, Apple TV, Google Chromecast and now Amazon Fire TV are directly competitive with TVs’ built-in Smart platforms, and often provide a better experience: more apps, slicker interfaces and more updates. Video game consoles are smarter than ever, incorporating the same apps and, in the case of the Xbox One, essentially the same TV-centric functionality as an advanced Smart TV. And of course external cable or satellite boxes are necessary, in the U.S. at least, to provide TVs with most television programming and all-important DVR time-shifting.

After playing with WebOS and learning its advantages and weaknesses, I’m fairly certain it’s “just another evolution” in the genre, not a game-changer that’ll replace all those external boxes. It definitely won’t replace my Roku, for example, because LG doesn’t have HBO Go. And my Roku, as well as Apple TV, Chromecast and the rest, are already very simple to use themselves. Yes, setup is a bit more complex, and you do have to deal with an external box, but those are minor issues in my book.

Meanwhile at AVForums, Steve Withers comes to precisely the opposite conclusion, saying WebOS is indeed a game changer. This is because switching between content, apps, channels, and other plugged in devices is as easy as switching apps:

It’s a phrase that gets used far too often but in the case of LG’s new system it’s appropriate, Smart+ is a game changer… The entire interface is highly intuitive, combining simplicity and elegant graphic design with a slick and fast system architecture. Just how fast will depend on the model you buy but it’s good to see that LG are rolling Smart+ out to the majority of their new TVs, so it won’t just be available on the high-end sets. The use of quad-core processing means that for most, Smart+ will be very fast, switching between apps almost instantaneously. Obviously if the system needs to open your Netflix account for example, that might take a few seconds, but otherwise Smart+ is impressively quick.

The beauty of Smart+ is the way that it treats everything as a separate app, so if you’re watching a live TV programme and want to go to the TV guide, you just open the launcher and select it. Smart+ will take you into the TV guide, which shares the same design and functionality of the rest of the system. Again the TV Guide doesn’t feel like a separate feature but part of a unified system. It shows the current channel in a window in the top left hand corner and includes channels and upcoming programming.

The concept of treating everything as an app extends even to the devices connected to the TV itself. So one of the apps you can select from the launcher menu is Device Connector which allows you to easily setup any device you want to connect to the TV. These devices include a set-top box, Blu-ray player, sound bar, games console, smartphone, external HDD etc. and you can set them up to appear on the launcher menu as individual pop-up tags. The setup process is, like everything else on Smart+, easy and intuitive.

Unless you’re an early adopter, my reaction at this stage would be to hold off getting a smart TV for the next 12 months or so, while watching closely what happens in the marketplace.

It appears as though this could be a repeat of the battles between VHS and Betamax. In that battle, those who picked the wrong format (Betamax) quickly found they wasted their money. The risk in the smart TV market is that early adopters who pick the wrong format will end up doing the same thing.