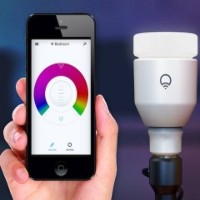 Back in 2012, a San Francisco-based tech startup founded by an entrepreneur from Melbourne, named Phil Bosua, made headlines by raising $1.3 million in just six days on crowdfunding site Kickstarter.

That startup, known as LIFX, ended up creating a Wi-Fi enabled, energy efficient LED light globe that can be controlled through an iPhone or Android app, and can switch to any one of 16 million colours.

So is the idea of a light globe that connects to the internet of things enlightened? Or is it nothing more than a colourful novelty?

It’s time to find out.

LIFX bulbs are designed to automatically detect your home Wi-Fi network, and can integrate with Google Nest smoke alarms. For example, when a Nest alarm goes off, any nearby LIFX bulbs will flash red.

Through an app for Android or iPhone, the bulbs can be adjusted to any one of 16 million colours.

The app comes with a music visualiser effect by default, meaning it can change colour in time with the music.

Ry Crist at CNet was impressed the LIFX could at least perform its basic task of illuminating a room, although noted there are still a lot of features that need to be added:

As multicolor LEDs go, the Lifx is probably the best-looking one that I’ve seen, and certainly the brightest. With dozens of diodes and 1,000 lumens to its name, it’s a muscular bulb, capable of producing bright, vivid light of any color you want. Like the Philips Hue LED, it offers both a full color spectrum and a natural light spectrum, but by allowing you to combine the two simply by dialing a color’s brightness up from 50 to 100 percent, it essentially offers you a third spectrum of tinted white light to play with — and that makes a lot of sense for more practical household lighting scenarios.

Still, the lack of basic smart features like scheduling or alert notifications is definitely disappointing at this point. Muscles aside, the Lifx needs to get smarter if it wants to stay competitive. As of now, even bulbs like the Lumen LED that are less powerful (and less expensive) are outsmarting it at nearly every turn.

John R. Delaney at PC World liked the options when it comes to controlling multiple globes, and says there are a number of other features that can justify the price:

You can choose to give all of your lights the same color and dimming attributes, set each one up with its own color and brightness, or place bulbs into a group, such as a bedroom or kitchen, which allows you to control multiple bulbs from a single menu icon. You can also create scenes for each bulb or a group of bulbs; much like the Hue, the LIFX scenes are color presets that you create and name.

At around $100 per bulb the LIFX is the most expensive smart bulb we’ve seen, but its long life span, high luminosity, and excellent color quality make it a worthy investment. And unlike the Philips Hue and Connected By TCP lighting systems, LIFX bulbs do not require a bridge. I prefer the LIFX’s color wheel approach to selecting a color over the Hue’s rainbow method, and the Music Visualizer effect is a blast.

Finally,Good Gear Guidecameup with a number of justifications for spending $1000 on a light globe:

Think of this bulb as taking you one step further into home automation of sorts. You can control the light bulb from anywhere in your home using your smartphone, but not only can you turn it off and on without getting up, you can also dim the light, change its colour, or even select a pre-set pattern for it to display. At first it’s a bit of a novelty to be able to do all these things — and quite fun — but the ability to change the colour of the bulb serves a purpose to make your living area a lot more comfortable.

You don’t have to put up with a white or orange glow and nothing else. You can change to yellow, purple, blue, green, red (and more), and vary the intensity of the bulb, which again changes those colours. The specs say you can select from 16.7 million colours, but the truth is you’re limited by how well you can control the colour wheel that’s present in the LIFX smartphone app. We love the idea of using the light bulb to change colour to suit a particular time of day, such as switching it on in the early hours to an orange colour, and then using a darker orange or red at night before going to sleep.

If you’re an early adopter and are willing to pay a significant premium for new gadgets, or you’re a sound and lighting enthusiast, this one’s for you.

Likewise, I’m sure that more than a few people will snicker at the concept of paying $100 for a light globe and find the idea of a Wi-Fi enabled globe to be complete overkill.

For the rest of us, it might well be that internet connected globes will be the wave of the future. But I suspect it will take more features at a lower price point to convince most consumers to plug in.