May the 3D be with you: Facebook rolls out 360-degree videos 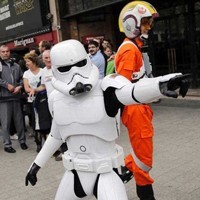 Facebook has begun rolling out 360-degree videos on the news feed, with the launch allowing users to immerse themselves in, and explore, the new Star Wars trailer.

The videos are made using a set of cameras that simultaneously record 360 degrees of a scene, and viewers can then choose what angle they want to see while watching by using a cursor, their finger or even tilting a phone.

The launch includes videos from partnering media companies such as comedy/variety show Saturday Night Live, where you can spin away from Jimmy Fallon and Justin Timberlake to see the crew or crowd. Users can also access 3D content from GoPro and VICE.

Facebook’s focus on these virtual reality videos was revealed earlier this month, with claims the social networking giant was working on a standalone app for the medium, but at the moment it seems they’ll also be fully integrating into the normal news feed.

“This is one reason video has been so successful on Facebook and we’re excited to take it a step further with 360 video.”

Facebook has taken a big bet on virtual reality with the $2 billion acquisition of Oculus Rift last year, and this is the first attempt to take the new format to the masses. Although others like YouTube already boast a similar feature, this is the first time it’ll be widely available without the need to search for them.

The 3D videos have begun rolling out on the web and Android phones already, will they’ll be seen on iOS in the “coming months”.

You can try out the 3D Star Wars trailer here, which allows the user to move all the way around while riding on some sort of aircraft.

Facebook is making it clear that the platform isn’t just for big media companies though.

“In the future, imagine watching 360 videos of a friend’s vacation to a small village in France or a festival in Brazil – you’ll be able to look around and experience it as if you were there,” Saba says.