Meet the real Tim Cook: Best of the Web 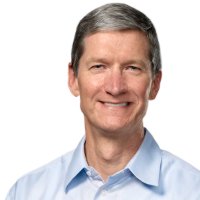 To most, Tim Cook is the man who stepped in to fill the big shoes left behind when Apple co-founder and chief executive Steve Jobs passed away. While he has often been characterised as an operations guru, many have questioned whether he can match Jobs’ vision.

But who is the man behind the top job at Apple? It’s a question Matt Richtel and Brian X. Chen of The New York Times attempt to answer in their profile.

A key focus of their profile is a formative moment Cook experienced as an adolescent boy in a small Alabama town in the early 1970s:

Bicycling home on a new 10-speed, he passed a large cross in flames in front of a house — one that he knew belonged to a black family. Around the cross were Klansmen, dressed in white cloaks and hoods, chanting racial slurs. Mr. Cook heard glass break, maybe someone throwing something through a window. He yelled, “Stop!”

One of the men lifted his conical hood, and Mr. Cook recognized a deacon from a local church (not Mr. Cook’s). Startled, he pedalled away.

The experience had a big impact on a young Cook, and the direction he intends to steer Apple:

[Cook] said his new awareness made him feel that no matter what you do in life, human rights and dignity are values that need to be acted upon. And then came the segue: His company, Apple, is one that believed deeply in “advancing humanity”.

Despite Cook’s aim of “steering humanity”, Richtel and Chen say pleasing investors while steering Apple remains an even bigger challenge.

How the Palm Pilot shaped the smartphone

Long before the days of Android, iOS and Windows Phone, there was the humble Palm Pilot. The long-running series of personal digital assistants (PDAs) eventually came to include mobile phone functionality.

Unfortunately, following an ill-fated takeover by HP, the company dropped out of the smartphone market. However, even today, the company’s webOS operating system lives on, powering LG’s smart TV platform.

Over at The Tech Block, Jayanth Prathipati looks back at five key features from the Palm Pre that have found their way into all of the contemporary smartphone platforms. These include features like system-wide search, unified calendars and messaging, and interactive notifications.

In my opinion, Prathipati’s article gives this often overlooked platform some long overdue credit in terms of inventing many of the features smartphone users now take for granted.

Over at BusinessWeek, Brad Stone takes a look at Lab126, the high tech hardware lab where tech and online retail giant Amazon has been secretly working on its smartphone:

More than 1,600 people claim Lab126 as their employer on the professional networking site LinkedIn (LNKD). Just a few months ago, Amazon investors might reasonably have demanded to know what those expensive engineers and product managers—and many others working on device hardware and software from Amazon’s offices in Seattle and in Cambridge, Mass.—were actually doing.

But this is turning out to be a big year for Lab126. Amazon released its Fire TV set-top box in April, to good reviews and endless promotion on the Amazon home page. Around the same time the company started quietly distributing the wand-like Amazon Dash, which lets users of its AmazonFresh grocery service scan barcodes of everyday items and add them to their online shopping lists. Tomorrow’s announcement—and refreshes to the e-reader and tablets that are no doubt coming later this year—will make this the most productive year for Lab126 since Chief Executive Officer Jeff Bezos established the group to pursue a digital reading device back in 2004.

Since the days of Xerox’s PARC facility in the 1960s and Atari’s secret Cyan Labs and Hi-Toro/Amiga skunkworks, a number of secret Silicon Valley labs have risen to legendary status. In recent times, these have included Google X, Microsoft Research and Apple’s secret R&D efforts under Steve Jobs. Could Lab126 be on the verge of joining that legendary list?

Martyn Williams at IT World covered Gates’ speech, which featured optimism as a key theme:

“There are so many remarkable things going on here at this campus, but if Melinda and I had to put into one word what we love most about Stanford, it’s the optimism,” said Bill Gates. “There’s an infectious feeling here that innovation can solve almost every problem.”

Bill Gates was one such optimist in the mid-90s when Microsoft was donating computers to help bridge the digital divide. But while the project found a measure of success in the U.S., a trip to South Africa taught him a lot.

Whether in business or philanthropy, Gates says graduating students need to be optimistic in shaping the future:

“As I started learning in Soweto, if we are going to make our optimism matter to everyone and empower people everywhere, we need to see the lives of those most in need. If we have optimism without empathy, it doesn’t matter how much we master the secrets of science. We are not really solving problems,” he said. “We are just working on puzzles.”