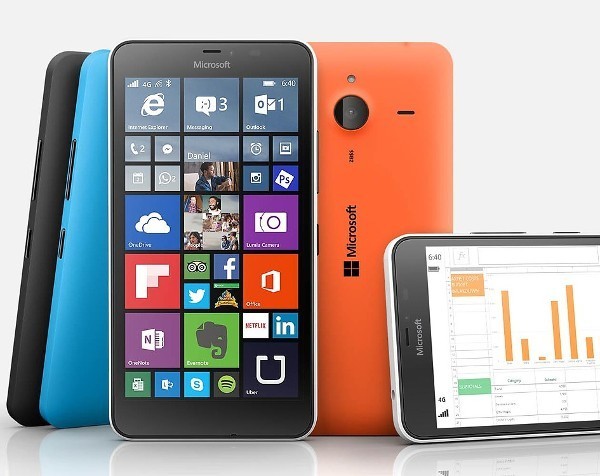 Earlier this year, Microsoft managed to capture 10% of the Australian smartphone market for its Windows Phone smartphones. While it remains a long way behind devices running Android or Apple’s iPhone, the Kantar WorldPanel figures show the tech giant is at least closing the gap.

Alongside this news, Microsoft released its latest 4G/LTE-capable midrange smartphones in Australia: the 5-inch Lumia 640 at a price point of $299 outright and the 5.7-inch Lumia 640XL phablet for $399.

But how well do they stack up against flagship smartphones from Apple and Samsung? It’s time to find out.

It runs Windows Phone 8.1 with Lumia Denim, meaning it includes Cortana (Microsoft’s equivalent to Siri and Google Now) and will be able to be upgraded to Windows 10 when it launches later this year.

Powered by a 1.2 GHz quad-core Qualcomm Snapdragon 400 processor, the Lumia 640 includes 8GB storage expandable up to 128GB by micro SD, as well as an FM radio built in.

It also comes with a one year Office 365 subscription that can also be used on one PC or Mac, and one (Android, iOS or Windows) tablet, as well as a terabyte of cloud storage on OneDrive and 60 Skype world minutes of calling per month for 12 months.

The first thing you notice about the Lumia 640 is how well it stacks up against smartphones that a year or two ago were the main flagships for Apple or Samsung.

A couple of years ago, Apple released the iPhone 5C, a plastic smartphone that featured the same specs as the previous year’s iPhone, at a slight discount. One way of thinking about the Lumia 640 is it’s a phone in a plastic shell that features slightly better specs than last year’s flagship smartphones – at a significant discount.

But there are a few drawbacks compared to most flagship smartphones on the market. For example, you won’t get the nice metal-and-glass finish you’d now expect with a flagship smartphone. Instead, as with Nokia mobile phones of yore, the Lumia 640 features swappable plastic covers.

Also, with just 8 gigabytes of included storage, which is at the very low end of what you’d get with a flagship smartphone, you’re probably going to want to either also get a microSD card or make heavy use of OneDrive.

However, with these exceptions aside, what you have is a smartphone that stacks up well against some of the best on the market, at a fraction of the price.

A common concern people have about buying a Windows Phone smartphone is the number of apps available. However, this is far less of an issue than most people imagine. Aside from a range of Microsoft apps that do everything from recipes to panorama photos, maps, news, stocks and finance, most of the popular apps you’d look to find are available for Windows Phone.

Meanwhile Windows 10, which will be released later this year and will work on the Lumia 640, will see the introduction of “universal apps”, meaning the same apps will work across the whole Windows ecosystem, from smartphones to Surface tablets, Xboxes and desktop PCs.

Finally, for people already using lower-end or older Windows Phone/Lumia devices, the Lumia 640 is a nice upgrade. For example, having an extra row of tiles on the homescreen and Cortana makes it worth the upgrade from a low-end Windows Phone, such as the Lumia 530.

With the Lumia 640, you’re basically getting a device with specs just a notch outside what you’d expect from a flagship smartphone for just $299 outright. You also get a device that’s ready to make the upgrade to Windows 10 when it’s released later this year, as well as a number of extra perks (such as the Office 365 subscription).

If you already own an iPhone 6 or a Samsung Galaxy S6, you probably won’t want to get a Lumia 640. But if you’re upgrading your phone, especially if you’re upgrading from an older device running Windows Phone 7, the Lumia 640 offers competitive specs at a much lower price point.

This review is based on a test unit supplied by Microsoft. The article was updated on May 11 to clarify the Lumia 640 uses the 1.2 GHz quad-core Qualcomm Snapdragon 400 processor.