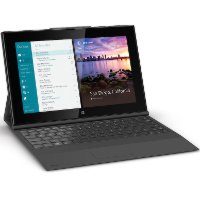 Back in October of last year, Microsoft and Nokia announced a new tablet known as the Lumia 2520.

As the name suggests, the new tablet is an extension of the company’s popular line of Lumia smartphones, and runs Windows RT 8.1.

As with Microsoft’s Surface range of tablets, a detachable keyboard – known as the Power Keyboard – was offered as an optional extra.

Unfortunately, Australian consumers wanting a 2520 had a long wait ahead of them, with the device not getting a local release until May of this year.

It boasts full 4G/ LTE connectivity, as well as Bluetooth 4.0 and Wi-Fi.

As far as office applications go, it comes preloaded with Office 365 (Excel, Word, PowerPoint and OneNote), Company Hub, and Lync as a free download. It supports a range of email services including Gmail, Yahoo! Mail, Exchange Active Sync, Hotmail/Outlook.com and Outlook/Office 365/Exchange.

It is offered through Telstra on a range of plans, beginning at $55 per month over 24 months.

In terms of look and feel, the 2520 will instantly feel familiar to Windows Phone users who rely on their Lumia smartphones. The familiar carbon fibre feel, the button layout and the general aesthetic is carried over and presented in a larger form.

For Lumia smartphone users, an added benefit of going with this tablet is, through the cloud-based magic of your Microsoft.com and OneDrive account, your contacts, photos and accounts are synced up between both devices.

On the cross-platform front, a nice additional touch is that the 2520 comes with an app called video director, which allows you to easily film video clips with your smartphone camera, and then edit them together on your larger tablet screen.

The Lumia 2520 runs Windows RT 8.1, meaning that aside from the preinstalled apps, it also runs the growing number of apps created for the Windows Store. However, while you can exit out of the Tile/Start Screen interface and run a desktop environment, desktop apps written for older versions of Windows won’t work with this device.

That being said, because most Windows Phone apps have a counterpart for Windows 8’s tile interface, and vice versa, almost all of the apps you’d expect to find on your Lumia smartphone are also available for the 2520.

As I noted last week, the tile interface does have its critics among traditionalists who prefer the traditional Start button layout Microsoft used between Windows 95 and Windows 7.

The good news is, when used as a tablet on a touch interface, the tile interface – including sliding charms from the right hand side or switching apps from the left – just feels natural.

As with Windows Phone, once you’ve loaded your Start Screen with your email accounts, messaging and social media apps, you get handy at-a-glance notifications in tiles on your start screen.

Unlike the many Wi-Fi only tablets on the market, the 2520 comes with full 4G/LTE connectivity, making this a great device for commuters.

Finally, with the addition of a Power Keyboard, the Lumia 2520 turns into a small laptop. The keyboard itself has nice raised keys and a very smooth rubber trackpad, along with a kickstand at the back that keeps the screen at a perfect angle.

Add in the preinstalled copy of Office 365 and you have a device that’s also ready to be used for business.

Especially if you are already a Microsoft Lumia smartphone user, and like the look and feel of your device, the 2520 is the first tablet you should look at, and is likely to make a great complementary device.

While those needing a full copy of Windows 8.1 should look at something like a Surface Pro 3 or Lenovo ThinkPad, if you mostly intend to use Windows Store apps, this is certainly a welcome alternative in the Windows tablet market.

This review is based on a test unit provided to TechCompany by Microsoft.