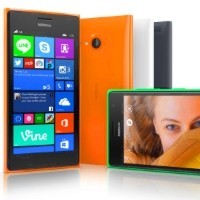 Microsoft has released its Lumia 735 4G smartphone in Australia with a local price of $399 outright, with the device aimed at users who post photos of themselves (or “selfies”) on social media.

The device is powered by a 1.2 GHz quad-core Qualcomm Snapdragon 400 processor and a 4.7-inch full HD OLED display, meaning the screen is as large (diagonally) as the one on the iPhone 6.

The device runs the “Denim” update of Windows Phone 8.1. Aside from the standard Windows Phone apps (such as HERE Maps) and a custom “Lumia Selfie” app, the device includes Outlook, Word, Excel, OneNote and PowerPoint, as well as 15 gigabytes of free cloud storage on Microsoft OneDrive.

“With the Lumia 735, we’re enabling people to more easily capture and share more of what they want through unique Lumia innovation and the best Microsoft experiences and providing people with more choice at different price-points,” Microsoft Mobile Devices in Australia and New Zealand general manager Steve Lewis said in a statement.