Microsoft releases of Lumia 930 and 635 4G smartphones with Windows Phone 8.1 in Australia 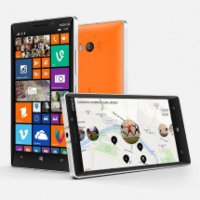 Microsoft has released its premium Lumia 930 and low-end Lumia 635 4G smartphones in Australia, with both devices powered by its new Windows Phone 8.1 operating system, which was announced at Microsoft Build in April.

The smartphone features a 5-inch Full-HD OLED display and is built around a 2.2 GHz quad-core Qualcomm Snapdragon 800 processor.

In terms of memory, the 930 comes with 2 gigabytes of RAM, 32 gigabytes of internal memory and 7 gigabytes of included OneDrive cloud storage. It also includes a 20 megapixel main camera with optical image stabilisation and a 2420 mAh battery with integrated wireless charging.

Meanwhile, the low-end Lumia 635, at $279 outright, features a smaller 4.5-inch FWCGA display and is powered by a 1.2 GHz quad-core Qualcomm Snapdragon 400 processor. It also includes an 1830 mAh battery and a 5 megapixel camera.