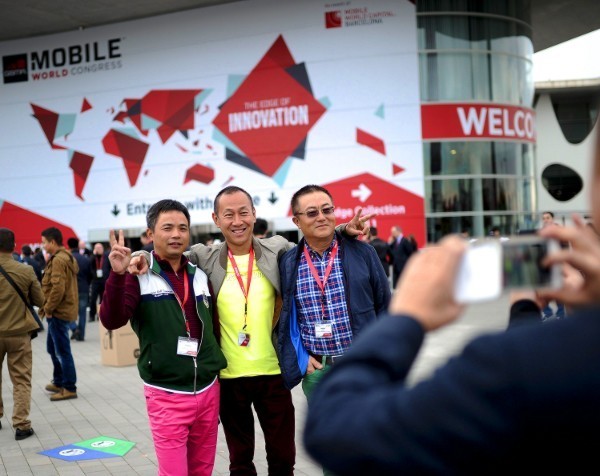 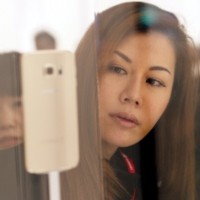 The Mobile World Congress trade show has kicked off in Barcelona, with major announcements from tech giants including Samsung, HTC, Microsoft, BlackBerry and Lenovo.

Perhaps even more than the Consumer Electronics Show in January, the MWC is the big event where mobile phone makers unveil their new smartphones and other products for the year ahead.

Aside from flagship smartphones, this years’ show has included virtual reality headsets, tablets and a range of other devices. Here are seven of the biggest announcements from day one of this years’ show:

Perhaps the biggest news story to come out of MWC so far is Samsung’s update to its flagship Galaxy S series of smartphones.

This year sees the South Korean smartphone giant introduce two new devices: the regular Galaxy S6 and the S6 edge, which has a screen that bends around the edges of the device on both sides. It is also releasing a new virtual reality headset that will work with both models.

Samsung is taking a design cue from Apple with its latest flagships, scrapping its replicable batteries and plastic covers in favour of an all-metal design. It has also struck a partnership with furniture giant IKEA, which will embed Samsung wireless chargers in some of its furniture.

The new devices come at a make-or-break time for the tech giant, which has seen its sales crumble in recent times. Apple’s iPhone 6 has taken a chunk out of the high-end large screen smartphone market, while low-end and mid-range devices from a range of companies. The situation was made worse with long-time chairman Kun-hee Lee suffering a serious heart attack last year.

There’s also a new flagship smartphone from another major Android manufacturer in HTC, which showed off its newest device, the HTC One M9.

On a different front, HTC is partnering with games giant Valve on a new virtual reality headset of its own, called the HTC Vive. The companies promise a developer edition will be released in the coming months, with a consumer version before the end of the year.

The news suggests that along with augmented reality devices such as Microsoft’s HoloLens, virtual reality is likely to be a key emerging trend this year.

HTC is also preparing to compete in the wearables market with a new fitness tracker called the HTC Grip. The wristband works with both iOS and Android devices, and stores its tracking data in the Under Armour Record app.

Both of the 4G smartphones will include Office 265, a terabyte of storage on OneDrive and 60 minutes of Skype calls, and while initially shipping with Windows Phone 8.1 (Lumia Denim), will be able to be upgraded to Windows 10.

In terms of Microsoft’s hardware partners, the big news is that Acer is set to launch its first Windows Phone 8.1 device, a smartphone called the Liquid M220. Also, HP showed off a convertible 13.3-inch tablet/laptop called the Spectre x360, which folds in a manner similar to Lenovo’s Yoga pad.

Microsoft also unveiled a wireless keyboard that can be folded in half and will work with iOS, Android and Windows devices.

More broadly, the company reiterated its commitment to supporting devices across a range of platforms, while at the same time committing to the Windows platform as its “home”, where users would experience the company’s services at their best.

BlackBerry’s key focus this year is on cross-platform secure communications services for businesses that work across iOS, Android and BlackBerry devices, rather than on new devices.

The key focus is a cloud version of its BES12 mobile device management product aimed at both small businesses and large enterprises. The service will allow company IT teams to manage containers across iOS, Samsung KNOX, Android for Work, Windows Phone and BlackBerry 10 devices.

The company is also gearing up a service called WorkLife that will allow companies to bill personal calls and data use separately to company use, and SecuSUITE, which offers end-to-end encryption of voice calls and SMS text messages.

Finally, on the mobile messaging front, the company is adding a range of new features to its WhatsApp rival BBM across iOS, Android and BlackBerry 10, including custom PINs, integration of iOS TouchID as a security measure, and photos in group chats.

The announcements formed part of an ongoing transition for the company under chief executive John Chen from being predominantly a device maker to being a cross-platform cloud-based services firm.

Lenovo and its subsidiary Motorola are keen to change the conversation after it recently came to light malware had accidentally been installed on some of the company’s computers.

Under the Lenovo brand, the Chinese electronics giant announced a new two-in-one 16-megapixel smartphone and camera called the Lenovo VIBE Shot, along with a pocket-sized video projector for Android creatively titled the Lenovo Pocket Projector.

Mozilla revealed a host of new features it is adding to its Firefox OS operating system, including WebRTC, right to left language support and NFC payments. It also unveiled a partnership with Japan’s KDDI Open Innovation Fund in an Internet of Things venture called Monohm, which is working on IoT devices based on Firefox OS.

However, the most surprising news is a decidedly low-fi move to boost its market share in emerging markets. Mozilla says it is creating a range of flips, sliders and candybar phones preloaded with its smartphone platform Firefox OS.

It’s no secret that, in recent years, Sony has struggled.

This year at MWC, the company unveiled the latest iteration in its waterproof tablet series, called the Xperia Z4, it hopes will reverse its flagging fortunes.

A key new feature is the addition of a Surface-style keyboard that allows it to transform into a small laptop. It now also includes a 64-bit octo-core processor and an upgrade to Android 5.0 Lollipop, along with a new kickstand.