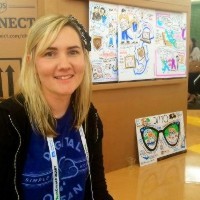 Tammy Butow wanted to work at a startup in New York and set herself the goal of getting there by January next year, but it took just three months to realise that dream with a job offer from the company she wanted to work for.

Butow is well-known at home in Australia for the work she did in growing Girl Geek in Melbourne, a movement which aims to encourage more women in tech, and also as a founder of Girl Geek Academy, which she is still involved in.

It was while holding a number of female-focused hackathons that Butow realised that a lot of women weren’t comfortable deploying their code and that it was something she felt she should do something about.

She thought the best way she could this was to work for a cloud-hosting company and settled on New York-based Digital Ocean as her number one choice of great companies to work for.

She sent them what is now an infamously “long cover letter” to tell them why they should hire her, only to be initially told that they weren’t hiring Australians.

Not deterred, Butow found an online forum, which mentioned an Australian hire and wrote back to Digital Ocean to insist they consider her application.

Impressed by her perseverance, they offered her the chance to sit one of their developer tests, and before she knew it, she’d managed to pull off a job at the company she wanted in a role that was created just for her.

Now she’s representing the company at events like TechCrunch Disrupt, something she says is a dream come true.

“I want more women to feel encouraged to pursue the things that they want to and not be put off when people say ‘no’,” Butow says.

She has a number of tips for women who want to get the attention of larger technology companies:

1. Write about your area of expertise

Butow wrote a number of posts on Medium that she was able to use in her resume and prove that she had in-depth expertise in her area.

2. Get comfortable speaking in public

Butow says that you can start giving talks within your company, but that you should try and get as much experience as you can. “The more you do it, the more confident you get,” she says.

There’s nothing to lose in asking for what you want, says Butow. Just be brave enough and do it.

Having a mentor has been an important part of Butow’s journey.

“My mentor encouraged me at times I had doubts, and that was invaluable for me to put myself out there,” Butow says.

So has Australia lost Butow to New York?

“I still feel very connected to Melbourne and I’m still involved in the Girl Geek Academy,” she says.

“But for now, I’m loving New York and getting involved in the scene here to encourage more female developers.”