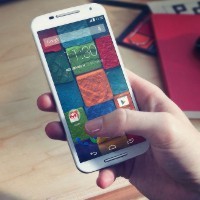 In recent times, Motorola – a former subsidiary of Google sold to Lenovo in January for $US2.91 billion – has staked its claim on the low-end of the smartphone market.

Earlier this month, in a video review, I took a look at the Moto E, a surprisingly good smartphone given its price tag of just $179 outright. The company also offers its mid-tier Moto G devices, offering 4G and a recent version of Android at a reasonable price.

Overshadowed by the launch of Apple’s iPhone 6 and its own Moto 360 smartwatch, the company has upgraded its flagship smartphone, the Moto X.

So how well does it hold up against premium Android devices from the likes of Samsung, LG and Sony? It’s time to find out.

The Moto X is a 4G Android smartphone running 4.4.4 KitKat. It is based on a quad-core 2.5GHz Qualcom Snapdragon 801, alongside a 578 MHz Adreno 330 graphics processor, natural language processor and contextual computing processor.

In terms of cameras, the Moto X features a 13-megapixel camera capable of 4K UHD video capture and 1080p HD video at 30 frames per second, along with a 2 megapixel front camera.

In a review titled ‘Still the Android phone for everyone’, Brent Rose from Gizmodo is full of praise for the look and feel of the Moto X:

From the moment I picked it up, I tangibly felt the quality of this device. From the front, it almost looks like a Samsung handset, with its wideish rectangle shape and its gently rounded sides. Unlike a Samsung phone, there’s no physical button up front; instead, you get a big front-facing speaker, which is definitely a good swap. (More on those later.) The phone is ringed with an aluminium band that makes it feel extremely solid, even if it makes the new Moto X look a whole lot like the new HTC One (M8) when viewed from the side. The back has a nice slow curve that makes it feel snug in your palm. There’s also a little divot emblazoned with the Motorola emblem, which gives you a nice place to rest your finger and balance the weight of the phone.

Chris Velazco of Engadget says Motorola’s flagship has gone “from also-ran to amazing in one year”, with processing power to match the best in the industry:

Last year’s Moto X might’ve been Motorola’s flagship, but it lacked the sheer oomph many of its rivals did thanks to its curious chipset (a dual-core Snapdragon S4 Pro plus some additional contextual modules, remember?). That isn’t the case this time. In terms of raw performance, there isn’t a great difference between the Moto X and most other top-tier smartphones. That really shouldn’t be a surprise: After all, the Moto X shares the high-end Qualcomm Snapdragon 801 chipset as heavyweights like the Galaxy S5 and the One M8.

You can peep our benchmark tests below if you’re the numerical sort, but what this all boils down to is that the new Moto X simply screams. There’s very little you can do to stymie those formidable guts (though all the silicon in the world might not be enough to make Facebook for Android feel smooth). Swiping through web pages is fluid, as is trying to take those tricky corners in Asphalt 8, and apps launch in a jiffy. The point is, don’t fret: The Moto X won’t leave you wanting for horsepower.

As Chris Davies at Slashgear notes, the performance of the Moto X is helped by the fact it uses close to stock Android 4.4.4 KitKat, avoiding needless extra skins and bloat:

Motorola’s approach with its more recent smartphones hasn’t been so much what value it can add to Android, but what it can take away: namely, the sort of needless bloatware, confusing reskins, and generally performance-sapping modifications that Samsung, LG, and HTC can’t seem to stop themselves from adding.

The result was everyday performance that belied the on-paper specifications, and while the Moto X didn’t shine in raw benchmarks, for everyday use it held up well. Motorola has stuck with that strategy with the 2014 version, and so Android 4.4.4 KitKat comes almost entirely as you’d find a Google Play device.

At Yahoo Tech, Daniel Howley notes the screen holds up well against the best in the market, and the front-facing speakers give great audio performance:

With a higher resolution of 1920 × 1080, the new Moto X’s 5.2-inch AMOLED display blows away last year’s model. In fact, the second-gen Moto X’s screen is so good that it’s neck and neck with the Samsung Galaxy S5’s 5.1-inch, 1080p Super AMOLED display, my favorite screen on the market.

AMOLED display technology offers better contrast and deeper colors than most competing technologies, which is why the Moto X’s screen looks so great. The downside to AMOLED screens is that they don’t get very bright and can be difficult to read in direct sunlight. Samsung’s Super AMOLED display addresses this issue, making it easier to read outside than the Moto X’s screen.

Motorola chose to move the Moto X’s speaker from the back of the phone to the front this time around, positioning it just below the handset’s display, and it pays off wonderfully. And while it doesn’t sound as precise as the HTC One M8’s dual front-mounted BoomSound speakers, the Moto X does pump out great audio. Bass hits are loud and booming, and guitar solos squeal loudly.

The big downside for Jason Cross in PC Worldis the camera:

If you’re really into taking tons of pictures with your phone, and you’re a stickler for quality, get ready for disappointment. Motorola has dropped the Omnivision sensor in last year’s model and opted instead for a Sony IMX135 13-megapixel sensor with an f/2.25 aperture lens. This is the same sensor you’ll find in a lot of other phones, from the Galaxy S4 to the LG G3 and Galaxy Note 3, but the photos you get from it are remarkably average.

In low light, the images are simply too dark and full of noise.

For most Android users, the Moto X would be an excellent choice. On most of the key measures, the 2014 Moto X holds up well against the best devices currently on the market. It has won rave reviews from most of the major tech publications for its performance, screen quality and audio. As with other Motorola devices, it also runs close to stock Android.

The only major drawback is the camera, which probably rules the Moto X out for anyone who is serious about photography.