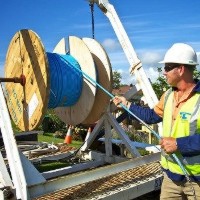 The NBN Co has announced the latest suburbs and towns in Victoria to be added to the National Broadband Network (NBN) rollout.

Meanwhile, fixed line services are currently being rolled out in other parts of Langwarrin, as well as Melbourne suburbs Seddon, Yarraville and Kingsville.

The NBN Co is also constructing fixed wireless infrastructure in south-western Victoria (Macarthur and Simpson), the Grampians (Balmoral and Drummond) and the Loddon-Mallee district (Elphinstone and Watchem).

In its statement, the NBN Co said it can take around 12 months from when construction begins to when residents and business owners can receive NBN services from phone and internet providers.

Meanwhile, services have now been switched on for more than 10,000 premises in Tullamarine and Shepparton, with businesses in these areas urged to begin planning their migration to the network.