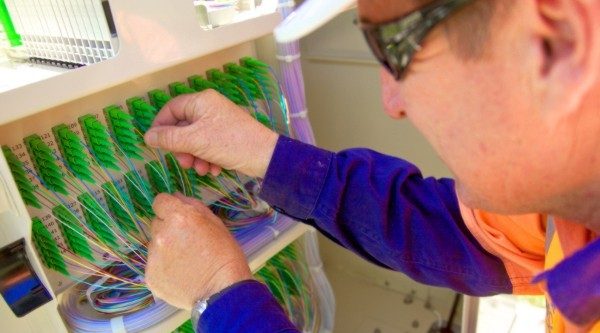 The chief executive of the National Broadband Network has lashed out at Australia’s telecommunications providers for providing unsatisfactory network speeds, accusing the sector of experiencing a “land grab phenomena” as providers fight it out for market share.

In a seven-page position paper, NBN Co boss Bill Morrow broke down the reasons he believes Australians are seeing poor or lower than advertised speeds on their broadband connections, putting the blame squarely in the lap of telcos.

NBN Co’s “infamous” Connectivity Virtual Circuit (CVC) charge has recently drawn criticism, which along with an Access Virtual Circuit (AVC) charge is one of the main expenses for retail service providers (RSPs) wanting to use the NBN network.

The CVC charge was once based on an industry average, but a pricing overhaul on June 1 saw that switch to a provider-specific charge, with a discount based on the average amount of network capacity purchased each month.

Telcos have reported being upset by these changes, with a suggestion it would lead to them not purchasing enough capacity due to increased costs, in turn meaning slower-than-advertised speeds for consumers.

“If this isn’t fixed and usage continues to grow there won’t be margins in the market, or the customer experience will diminish,” Vodafone general manager Matthew Lobb told Fairfax last week.

“The CVC component should be halved if not more, because that’s the additional constraint on the market. We’d like to see the usage charge significantly reduced and in doing so, the industry’s risk on usage and speed is reduced and because of that the market will move towards faster speeds.”

However, Morrow denied these claims, instead saying in the letter telco’s desire for market share coupled with competitive prices for customers were leaving them with no choice but to skimp on CVC costs, lest their margins suffer.

“As nbn releases over a hundred thousand new homes each week for the retailers to sell in to, there is aggressive pricing behaviour designed to maintain and/or increase their retail market share,” Morrow said.

“Some RSPs are advertising broadband plans for as low as $29. When you consider the minimum AVC cost them $24 for a 12/1 speed and they have to apportion a cost of the CVC charge, every expense must be as low as possible to make any kind of profit, if at all.”

“If an RSP doesn’t price their product high enough to recover their costs, they may be forced to cut corners that could affect the quality of the services being offered. If an RSP isn’t purchasing enough CVC capacity to offer the quality expected, that is a conscious choice to do so.”

Morrow also singled out market leader Telstra as the reason many RSPs are forced to lower prices, saying it was “historically…the price setter”. Discussing the telco’s 25 megabits per second offering, Morrow says the price has been reduced 20% over the last six months, causing a chain reaction in price drops as other providers are forced to stay competitive.

Founder of IT services firm Combo David Markus believes a number of micro businesses and sole traders are being forced onto NBN services as copper lines are deprecated, and speeds suffering because of to it.

He told SmartCompany NBN services are typically not “business grade” thanks to variable speeds and quality of connection, choosing to put his clients on faster fibre connections instead.

“For us, NBN only represents a backup connection, not a mainline connection. There’s a misconception that the NBN is a business grade line,” Markus says.

“Businesses on NBN should expect a lower quality of service. There’s likely going to be a higher level of contention with up to 20 people sharing your bandwidth, but with business grade services you can reduce that from four to even as low and one on one.”

Businesses on NBN often experience lower quality services either due to “contention or restrained data flow”, says Markus. In an ideal world the NBN would be a free flowing data service, but he acknowledges it has commercial constraints.

The overarching issues in the space are not black and white, he says, with either side unlikely to tell the truth and every RSP trying to “clip the ticket” on the data sold by the NBN.

“We’re in the middle of a price war and a quality of supply competition. You can’t have a fast and cheap and good connection, you just get to pick two,” he says.

For businesses puzzling over the right choice of connection given the differences in speed and price, Markus says to think carefully about how much you rely on an internet connection.

“If you’ve got 10 staff watching loading screens all day, spending $500 a month to get the connection you want is probably worth it. If it begins to impact your customers, I’d say it’s just an essential business expense,” he says.

“If you have a high dependency on a reliable data connection, you’re going to need to pay more.

“At the end of the day, the telcos need to provide reasonably costed broadband services to businesses to make us competitive on a global scale, and in my view, they’re not doing that yet.”

Gee, imagine that! A brain fart on the back of a RAAF drinks coaster being a massively expensive lemon. Never saw that coming.

There were plenty of doubters from the start, although it was difficult to separate those with good technical knowledge from those with a negative attitude. Political comment had a bit of both. I know a top technician in the satellite communications equipment industry and it was common knowledge that access promised to remote connections was not backed up by satellite capacity to any more than about 10% of estimated requirement. Unfortunately nearly all of us liked the hype about unlimited high speed internet instead of these old copper wires. My ADSL2 uses copper wire, and I’ll bet any amount that my near future change to NBN will be not better, and possibly worse. If Telstra allowed me to use 4GX via a modem at competitive prices, my download speed would be between 6 and 10 times what I am getting now on ADSL2. Which is around 11 mbps down, and is not much different to the baseline NBN offering.

The copper works, the existing system works, has done for nearly two decades, copper is old but time tested as reliable overall. To move to NBN I will get worse reliability based on others who have moved, and, I will pay at least 10 dollars a month more for this privilege.

I for one are super excited NBN wont be touching my area till 2019!

As for Morrows slow speeds, one thing, NBN dont tell you and dont want you to know is a thing called “co-existence”. This will see you get far slower speeds that you’re paying for, for a bunch of technical reasons which I wont go into (go google it) until the old copper system is fully shut down at your exchange and any ADSL circuits remain active, dont expect to get what you pay for, your speeds are substantially reduced.