Will IFLScience make or break the publishing industry? 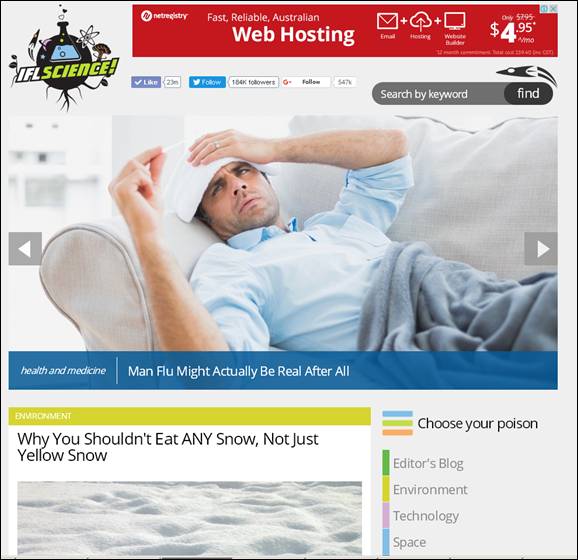 Every month or so, a few decent fellows and I get together to enjoy a meal and chat about all things life, family, work, AFL and publishing.

Why publishing?  Because at least three of our group are employed in various sectors of the publishing industry.

Publishing, of course, is an industry that – quite predictably mind you, has been more than disrupted by the online world.

Major retailers have closed down altogether (including the massive Borders chain) and hard copy sales have been slowly replaced by digital sales as publishers continue to explore ways of halting the decline.

Many have lost their jobs after a lifetime in the industry.

I once joked with an older member of our group how he must be thankful he is nearing retirement so as he can get out before the industry is completely decimated and with his super intact.  He wasn’t really amused.

In the meantime, others who have never published a thing in their life come along and create another form of publishing, a blog, which the founder claims to have knocked back an offer of $40 million for.

That’s right.  $40 million for a blog that was created as nothing more as a past-time.

Call her an accidental multimillionaire, but 27–year–old founder and ‘publisher’ Elise Andrew appears to have had no intention of creating a blogging powerhouse for herself.

Her website and supporting social media outlets, IFLScience (I F**king Love Science) were created as a diversion from her University studies.

After initially selling merchandise as its only revenue stream, the website soon started making revenue from advertising.

According to website analyst Hype Stat, the nearly four–year–old website would earn approximately $7200 a day from advertising revenue generated from its 50 million unique visitors a month.

But unlike most traditional publishers, IFLScience doesn’t sell its own advertising.  It simply tapped into advertising automaters like Google Adsense and Taboola to do that for them – though it has more recently appointed new business managers in the US and Europe – no doubt seeking a bigger slice of the advertising pie.

But surely such a website would be expensive to build and run?

Well, not really.  The site has cleverly kept to a simple blog-like design, with each post colour-coded to represent the various technology, health, space, environment areas and so on it covers.

The outlay for a website like this?   You would probably get change out $5000 for the website creation and $50 a month for hosting.  You would also need content, advertising, marketing and management staff as you grew.

But given its low barriers to entry, its something that could be literally be started in a bedroom or study – as this website did.

The world as we know it

But are blogs really ‘publishing’ as such?

If you consider publishing the notion of the creation, marketing and distribution of printed books, then no, IFL Science isn’t publishing.

But if you consider publishing to be creation, marketing and distribution of content, then it is absolutely publishing.

This blog has been at pains to encourage business operators to take the latter approach or risk going the way of the dodo.

And well before bloggers existed, marketing experts like Theodore Levitt were imploring businesses to embrace a ‘customer benefit’ rather than ‘current technology’ focus so as to stay in business as long as possible.

In other words, transport not trains, memories not cameras, music not CDs and stories not books.  All of which have been completely disrupted in the past few centuries.

And all of this has unsympathetically shut down businesses that failed to heed his warning.

When I ran all of this by one of our group at the weekend, he seemed quite interested in what I had to say.  Until I mentioned the word ‘advertising’ in the context of revenue stream.

At which point he involuntarily screwed up his nose a little and said something about publishers being a conservative bunch.

At which point we moved onto a topic far more palatable.  And a little less scary.