Mario Kart come to life: For the safety of delivery riders, it’s time to regulate UberEats 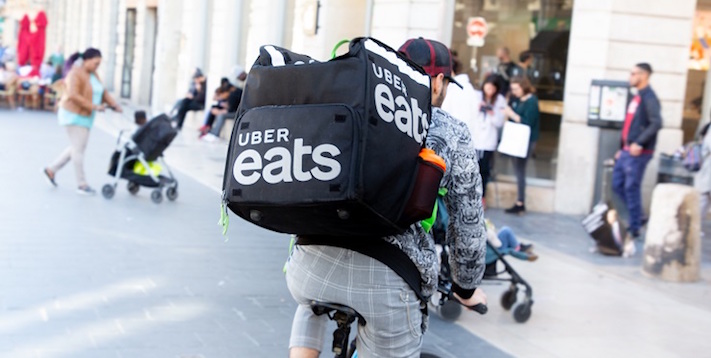 I’ve had it with our business, and most others, being the rule-abiding good guys, while arrogant global tech companies dodge all responsibility for keeping their staff safe and properly paid.

It’s a tragedy those two men died. But not at all surprising.

This is the end result of tech companies’ detached contempt for the people their algorithms control and the societies they operate in.

I live near a lot of restaurants.

Every night, it’s a scary night-vision driving test, trying not to run over weaving, wobbling food-cyclists.

It’s the full Mario Kart experience. All that’s missing are giant banana peels on the road.

Those riders are usually dressed in black, with minimal lights and reflectors.

If they’ve had any safety training, it isn’t working.

They’re steering with one hand, the other tapping away at a handlebar-mounted phone.

No time to stop and read their messages because the app gamifies every minute.

Coders in California have worked out the optimum blend of digital rewards and threats to keep them moving. If the riders don’t play the game, they earn zero instead of a sweet $6-12 an hour.

At best that’s $7 below the minimum wage.

It’s a miracle that dozens of delivery riders don’t die every year.

‘Just get the job done’

Business has come a long way with work safety.

As a young audiovisual technician, my job involved hanging 35kg video projectors in hotel ballroom ceilings, directly above the audience, without safety chains. I had to carry them up a wobbly 5-metre ladder, projector in one hand. Good core exercise, but pretty dangerous.

Those aluminium ladders were also a great way to get electrocuted when they got among the lighting power cables.

Occasionally, projectors dropped from the ceiling onto the tables of dinner guests below. Nobody died, and that was pure luck.

Working that same job, I was in the loading dock of a Sydney prestige hotel when three building workers ran in to ask for a tub of ice from the kitchen… to chill down two severed fingers from a worker on the office tower construction site across the road.

The hotel people said the ice tub requests came about once a month.

Back then, bending safety rules was the sign of a tough, brave worker willing to ‘just get the job done’.

We’re conscious of trip hazards, potential electrocution, and the dangers of professional drivers spending 20 hours at the wheel.

Your red tape is my personal safety

Now, to hang anything from a ballroom ceiling, our staff need qualifications, the same course construction workers do for crane lifting.

It takes them five days and costs us $1,200 each plus their wages.

There’s lots more regulation across everything we do. And we try to stay ahead of the curve.

We’d rather be too careful to keep our staff safe, instead of basic grudging compliance.

But what is a developer’s red tape is your protection against buying apartments left uninhabitable due to shonky, corner-cutting construction.

Red tape is rules that keep fingers attached to their rightful owners.

You could argue some safety regulation goes too far.

But in the big picture, it gets the safety mentality into people’s minds.

If someone’s apprentice kid comes home alive that night because an accident didn’t happen, it’s worth it.

Meanwhile, tech companies happily expose their ‘contractors’ to industrial revolution-era workplace dangers. And cut away all the financial safety nets.

Both UberEats and Hungry Panda said they ‘had offered support’ to the dead riders’ family.

They didn’t say if it was financial, or ‘thoughts and prayers’. Either way, it’s discretionary support.

If you die at work, your family gets a guaranteed $834,200 plus other benefits.

UberEats expects workers on below minimum wage to cover their own insurance.

The tech company mindset is it’s a game-changing strategic move to lower their cost structure, compared to the lumbering dinosaurs of regular commerce.

Supporting your staff? Ha! What an outdated business model!

This is not ingenious disruption. It’s the same as Donald Trump saying “that makes me smart” when he was called out on paying zero income tax.

It’s screwing the rest of the community they operate in.

Delivering via roads they didn’t help pay for. Safely protected by police they’re not paying for either.

The money you pay UberEats ends up in their Bermuda ‘headquarters’, via the Netherlands. Read about the Dutch Sandwich if you’re interested in tax scams, because they all use it.

You and I, the local taxpayers, are picking up their tab.

Oh, and despite the exploitation, UverEats is still losing a tonne of money. It lost US$232 million last quarter.

It’s not even good at business.

Why is it seen as any kind of business role model?

Time to introduce these tech giants to the same regulation the rest of us deal with.

NOW READ: Disrupting the disruptors: How restaurants and startups are flipping the table on meal platforms, and why UberEats should be worried

NOW READ: Delivery workers are now ‘essential’, so they deserve the rights extended to other employees