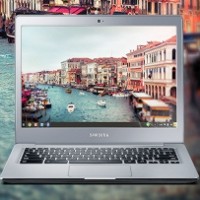 In the last couple of years, Google has attempted to make an incursion into the laptop market with its Chromebook series of devices.

Chromebooks run Google’s Chrome OS, a cut-down operating system where all apps basically operate out of a web browser. They’re designed as a low-cost way to access Google’s suite of web services and apps, as well as their party apps and extensions.

For small businesses, they represent a lower-cost alternative to a full Apple MacBook or Windows tablet for companies that rely on the Google ecosystem.

The platform has also begun gaining some traction in enterprises. In February, Woolworths announced it was shifting its 26,000 employees from Windows to Chromebooks.

Aside from Google itself, a range of hardware makers build their own version of the devices, including the likes of Dell, HP, Asus and Samsung.

Meanwhile, at its Google I/O developer conference, Google announced Chromebooks will soon gain the ability to run Android apps. This is great news for anyone who already uses Android on their smartphone or tablet.

So is it time to shift your business to Chrome? To find out, we’re taking a look at Samsung’s latest model, the Chromebook 2.

The Chromebook 2 is based on an eight-core Samsung Exynos processor. This includes four cores at 2 GHz for tasks with high performance demands, as well as four cores at 1.3 GHz for when the device switches to save battery life on less intensive tasks.

It comes in a colour known as “Luminous Titan”. Outside Samsung’s marketing department, this colour is more commonly known as “grey”.

It comes with a HDMI port, allowing you to hook it up to a PC monitor or TV, a USB 2.0 port and a USB 3.0 port, as well as separate microphone and headphone ports.

For WiFi connectivity, it comes with ac broadband (802.11ac) support.

Finally, it has a 4700 mAh battery, which the company claims will give you 8.5 hours of battery life. (Outside a laboratory test, this is likely to mean something like seven hours.)

In the US, it comes with a price tag of $US399 (around $427), although it’s unclear how much it will cost after the imposition of an Australia Tax.

An unusual feature of the Chromebook 2 is Samsung’s choice of fake leather (or ‘pleather’), rather than a more traditional material such as plastic, glass or aluminium, for the exterior.

But Engadget’s Dana Wollman says pleather has its benefits:

It’s easy to make fun of Samsung for its apparent leather fetish. I mean, if I wore pleather with everything, you’d laugh at me, too. But, as they say, don’t knock it till you try it. Aside from the corny “stitches” lining the perimeter of the lid, the fake leather (available in gray only on the 13-inch model) actually gives the device a premium feel. That’s partly because of the resemblance to real leather, but there’s something else at work, too: The textured material does a good job masking fingerprints. Scratches, too.

On the plus side, Google’s Chrome OS has grown vastly more capable in recent times:

After three years of incremental improvements, the operating system is finally in a place where you can multitask, as well as do a decent amount of work offline, without the aid of an internet connection. It helps to be able to resize, minimize and move windows, as well as pin apps to the desktop and swipe upward on the touchpad to see all open apps. Gmail and Google Drive support offline access, as do many third-party apps available in the Chrome App Store. Just remember to go through the syncing process while you still have a WiFi signal. Google’s G+ Photos app works offline as well, though the editing tools are crude compared to what you’d enjoy on a full editing suite like Photoshop. You can print, too, through Google Cloud Print; keep in mind, though, that not all printers are compatible.

Over at Time, Jared Newman says the screen leaves a little to be desired:

By default, the high pixel density made text a little small for my liking, and I have pretty good vision. Increasing page zoom to 125 percent in Chrome settings made things more readable; it should probably be set this way by default.

Pleather and screen quality aside, in terms of general build quality, JR Raphael from ComputerWorld is impressed:

In terms of build quality, the Chromebook 2 is a definite step up from Samsung’s past Chromebook efforts. It’s still a plastic-centric construction, but it feels solid and less flimsy than its predecessor (as well as some of the other devices in its class from different manufacturers). It’s not at the level of a design-focused system like Google’s Chromebook 11—and it’s nowhere near the level of a high-end laptop like the Chromebook Pixel, as you’d expect—but for a $320-$400 computer, the Chromebook 2 is reasonably well assembled and pleasant to use.

According to PC Pro, a major downside is the speed of Samsung’s Exynos processor, especially when compared to devices powered by Intel processors:

Performance is disappointing as well. We’ve become used to the snappy performance of Intel’s Haswell-class Celerons in recent Chromebooks, but inside the Chromebook 2 is an ARM-designed, Samsung-manufactured Exynos 5420 SoC… It doesn’t wake up quite as quickly from sleep, taking two or three seconds each time you open the lid before the screen comes alive. And once you have more than a handful of tabs open things begin to slow down further. A result of 659ms in the SunSpider JavaScript benchmark shows it isn’t as fast in a straight line as Intel’s processors, either, with the Dell achieving 323ms.

Increasingly, whether or not you should use a particular device depends on whether you prefer Google’s, Apple’s, Microsoft’s or Amazon’s apps or services. If your business relies on Microsoft Office 365 over Google Docs, or you choose to use an iPhone over an Android, there’s little need to look at this device.

That being said, a sluggish processor and perhaps screen issues aside, this looks like a decent option for any business that relies on the Google ecosystem.