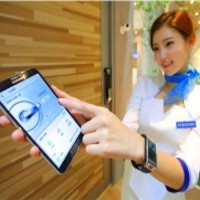 Samsung has developed a new version of Wi-Fi based on the 60 GHz microwave radio frequencies, which it says will allow a one gigabyte movie file to be transferred from a smartphone to a TV in just three seconds.

The announcement, made through the company’s Korean language news site (Google translation) is capable of speeds potentially as high as 4.6 gbps, compared to up to 866 mbps per stream for 802.11ac (ac Wi-Fi) wireless standard.

The company claims that while until now the 60 GHz spectrum has been of limited use for Wi-Fi due to poor permeability, the use of Beamforming as a control technology, along with improvements in modems and antennas, have made the frequency practical to use.

The use of 60 GHz radio waves forms the basis of the 802.11ad (ad Wi-Fi) standard, with devices using the technology expected to begin appearing next year.

Samsung says the technology will be important in connecting the Internet of Things, smart home appliances, imaging, medical and telecommunications equipment.

The tech giant has also published photos of a number of smart home technologies it demonstrated at the International Smart Home and Building Show at the COEX in Seoul last week.