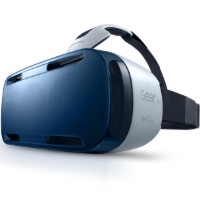 Back in the mid-1990s, there was a wave of excitement around virtual reality. In Japan, video game maker Nintendo went so far as to release a virtual reality game system known as the Virtual Boy.

Unfortunately, the conclusion from many was the technology of the day was not quite ready to produce the sorts of immersive experiences consumers expected.

In the case of the Virtual Boy, the entire display was rendered in red and black lines.

The low-resolution graphics of the day meant users were faced with a blocky and laggy virtual world that quickly induced headaches. The state of flat-screen LCD (liquid crystal display) technology at the time allowed the keen observer to count the number of pixels in front of them.

It was disorientating, and many users were left feeling nauseous from the experience.

The rapid increase in pixel resolution, two decades of research and advancements in graphics processors has fixed many of the initial problems.

In September, Samsung unveiled its first virtual reality headset, known as the Gear VR at the IFA trade show in Germany.

Developed in conjunction with Facebook-owned virtual reality device maker Oculus, the device allows a user to plug in their Galaxy Note 4 and use it as a virtual reality headset.

While it is unlikely to be released in Australia for a little while yet, the tech giant has given a number of people a sneak peak at the device.

So is it likely to be the first mainstream mass market virtual reality device? It’s time to find out.

As I noted in the intro, the Gear VR is a visor that allows a Galaxy Note 4 phablet to be placed in front of a user’s eyes.

The Gear VR includes an accelerometer as well as gyro, magnetic and proximity sensors. It connects to the Note 4 through a micro-USB 1.1 connection, and offers a 96-degree field of view with under 20 milliseconds of latency. It also has a control pad top to help navigate the virtual world.

CNet’s Scott Stein looked at several demos through the device, and noticed that a few key features of the Oculus Rift were missing in the new device:

I tried several demos in succession. During a virtual Coldplay concert, I saw the band perform in front of me while I turned around to see “fans” nearby, and a set of angel wings behind me. A virtual tour of Marvel’s “Avengers: Age of Ultron” let me explore objects, try on an Iron Man mask, and gawk at Tony Stark’s lab. A series of fly-overs of nature scenery showed 3D virtual video panoramas of lions, grasslands, tundra and mountains. And a dogfighting space game set in an asteroid field made use of the trackpad, showing how it could be used for targeting and firing while playing.

Gear VR doesn’t have the sort of camera-tracked additional positional accuracy that the latest Oculus and Project Morpheus headsets do, so head movement seems largely limited to tilting and turning. But it worked well through all four demos… But Oculus [Rift] also incorporated specialized anti-blur technology that, paired with improved head-tracking, aimed to reduce perceived nausea. It was hard to tell whether Gear VR handled blur and nausea well during my brief time with Samsung Gear VR: images seemed crisp, but I did get woozy after a few of those safari flyovers.

TechRadar’s Marc Chacksfield and Michael Rougeau found the device easy enough to set up, but some of the demos left a little to be desired:

It was pretty simple to connect the Note 4. I had to unclip the clear plastic ‘goggle’ on the front, then clip the Note 4 into place. In all it took around 30 seconds and was sturdy too. I didn’t feel like the Note 4 would fall out of its little compartment, even with a little shake to make sure.

Many of the games being shown off on the headset currently feel forgettable and unmistakably “mobile.” … But on the other hand Samsung’s Gear VR also has plenty of potential for difference use cases than Oculus Rift, including greater mobility and portability, not to mention the surprisingly awesome ability to turn full circles in a swivel chair without getting tangled up in cords and cables.

BGR’s Zach Epstein was impressed, off low expectations, but agrees it doesn’t quite match the Oculus Rift:

I got the opportunity to play with the Gear VR for a few minutes during meetings with Samsung and to be honest, I wasn’t expecting much. Within just a few seconds of testing the device, however, my stance was completely reversed. The Gear VR is a whole lot of fun.

The quality of the experience the Gear VR provides is impressive, though it obviously doesn’t quite match a dedicated device like the Oculus Rift. While the Gear VR’s audience will be extremely limited due to the fact that it only works with one phone, those who do purchase it will undoubtedly enjoy the Gear VR as long as Samsung ensures that a solid catalog of games is made available for it at launch.

Finally, Hayden Dingman from PC World enjoyed the demos, but found a few problems with the controls and the device overheating after prolonged use:

Samsung has a tendency to be first, you see, regardless of whether or not the implementation is right, and with a nascent technology like virtual reality that could be the difference between “This technology changes everyone’s lives” and “Virtual reality goes the same way it did back in the nineties.” And then I used Gear VR and my concerns melted away. Most of them, at least.

There are still problems though. First of all, Samsung’s [controller] is a hot piece of garbage. I didn’t have to use it much, and thank god for that. It’s an awkward shape, not really fitting into my hands comfortably no matter how much I shifted. Instead of analog sticks it uses slidepads that are recessed into the controller, and the D-pad is another circle that halfheartedly tilts slightly to the side when pressed… And finally, the Note 4 gets hot when it’s acting as the display and processing brains for the Gear VR. How do I know? Because after prolonged usage, the Note 4 pops up a warning talking about how hot it is!

From all indications, this device will be one for the early adopters – those who want to be the first with the latest tech gadget.

And by most reports, it can deliver a decent entertainment experience, although obviously not nearly as good as a dedicated unit such as the (also yet to be released) Oculus Rift.

Longer term, this is still a speculative technology. Certainly, virtual reality could be used innovatively to, for example, allow people to witness the scene of a news story first hand or to have an immersive tour of the streets a foreign city from their lounge chair, using virtual reality versions of apps such as Google StreetView.

However, what will ultimately make devices such as the Gear VR sink or swim is the quality of the apps developed for it. If useful apps are developed, virtual reality could conceivably become an everyday part of our lives. Otherwise, it will be destined to be a short-term novelty.

Either way, while this could be a fun toy to play with, as with all new devices, it might be worth waiting a few iterations before deciding to buy one for yourself.