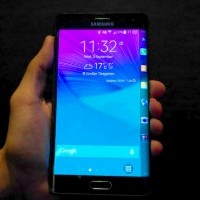 Samsung has unveiled its first virtual reality headset developed in conjunction with Oculus, known as the Gear VR, along with a smartphone with a screen that curves around the edges and the Galaxy Note 4.

Unveiled at its Unpacked 2014 Episode 2 event alongside the IFA trade show, the Gear VR includes full 360 degree 3D video with a 66-degree field of vision. The device uses a Galaxy Note 4, inserted in the front, as its display.

The South Korean tech giant also unveiled the dust and water resistant Galaxy Note 4, with an upgraded S Pen, which can emulate writing on paper with a fountain or calligraphy pen.

Alongside the Galaxy Note 4, Samsung has released a second phablet with similar specifications known as the Galaxy Note Edge, featuring a display that curves around the edges of the device. Unfortunately, however, it is not compatible with the Gear VR.

The tech giant also demonstrated a next-generation smartwatch known as the Gear S that features a 2-inch curved Super AMOLED display and full standalone 3G capabilities. Because it accepts its own SIM card, it is capable of making calls without being tethered to a smartphone.

The devices are slated for release later this year.