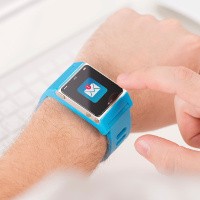 Samsung is preparing to announce a smartwatch with its own SIM card that can make calls without being tethered to a smartphone, according to Korean media reports.

Currently, Samsung’s smartwatches and wearables – such as the Galaxy Gear, the Gear 2, the Gear 2 Neo, and the Gear Fit – require being tethered to a smartphone through Bluetooth in order to display notifications or make calls.

According to Business Korea the new smartphone, dubbed the Gear Solo, will be a full 3G phone in its own right, and will be able to make and receive calls even if the user leaves their smartphone at home.

Meanwhile, Chosun Ilbo reports the new device is an attempt to fend off low-cost smartphone makers from China (such as ZTE, Lenovo, Huawei and Xiaomi). It is also a response to complaints from athletes about large-screen smartphones being impractical during physical activities.

The new device is set to be unveiled at the IFA trade show in Berlin, which will run from September 5 to 10. Samsung is also rumoured to be planning to unveil the Galaxy Note 4 phablet and an Oculus Rift-style virtual reality headset.

Samsung’s rumoured product announcements are partly a response to rumours Apple is planning to unveil the iPhone 6 during September. Meanwhile, rival LG is also rumoured to be planning to release a phablet with a stylus and an oval-faced smartwatch at IFA.