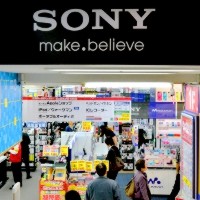 Sony has released a flagship and mid-range smartphone, along with wearable and smartwatch devices, in a major overhaul of its product line.

The devices, unveiled in Berlin ahead of the IFA consumer electronics show, include a 5.2-inch smartphone called the Xperia Z3, along with a more compact 4.6-inch version known as the Xperia Z3 Compact.

The Android smartphones are based on a 2.5 GHz quad-core CPU and are fully waterproof, with Sony claiming they feature the best camcorder in any smartphone, shooting 4K resolution at four times Full HD. They also act as a remote screen for the company’s Playstation 4 game console.

Sony’s first Android Gear smartwatch, the SmartWatch 3, features a 1.6-inch 320×320 TFT LCD display. However, the device doesn’t feature a round display like LG’s G Watch R or Motorola’s Moto 360, nor can it make calls without a smartphone, as Samsung’s Gear S does.

Sony’s new wearable, the SmartBand Talk, is a fitness tracking bracelet that features a 1.4-inch e-paper display and is capable of making calls. However, the device lacks the full functionality or full sized screen found on most smartwatches.