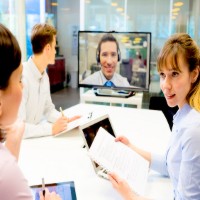 Telstra has announced it is rolling out a cloud-based video conferencing system it calls “business to business video”.

The new system will mean Cisco, Telstra IP telephony (TIPT), and Polycom voice and video sharing products will be interoperable with each other for Telstra’s cloud collaboration customers.

In February, Telstra began offering the Blue Jeans Network cloud-based multipoint video conferencing service in Australia, which is compatible with a range of video conferencing clients, including Google Video Chat and Microsoft Lync, and well as H.323 room video systems from Cisco, LifeSize and Polycom.

The latest announcement comes after the telecommunications giant announced it is opening up its TIPT (Telstra Internet Protocol Telephony) platform to third-party app developers in late May.

It also comes as part of its broader shift from offering traditional telecoms to cloud-based services, in the wake of a major cloud computing partnership it announced with Cisco in March.

“Telstra’s new business to business video solution will provide our cloud collaboration customers with video calling technology that is interoperable, easy to use and designed for business,” Telstra global enterprise and services executive director of global products and solutions Philip Jones said in a statement.

“The new capability adds further value to our partnerships with video conference services providers, such as Blue Jeans Network, our cloud collaboration partnership with Cisco and other existing services.”