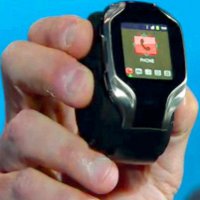 The Consumer Electronics Show has just closed its doors in Las Vegas for another year. Each instalment brings new innovations, but one thing is certain, over three key days of the CES there are a whole lot of gadgets on show.

The gadgets this year range from the gimmicky to the genius. There’s an internet connected toothbrush, a hairdryer that has 1000 times more moisture than a standard hair dryer and the more prosaic-like quicker, slimmer and lighter laptops.

“It gives consumers a view into what might be the future, but the biggest challenge with CES is that not all the products that are demonstrated make it to consumers,” Fadaghi says.

“Apple is also missing from this event, which is obviously a company which drives trends.”

It’s a good showcase of the connected home, with every device being connectable.

We’ve waded through the slew of gadgets on show to pick the 10 best that you should keep an eye out for:

Wearable computers were everywhere at CES this year and one of the leaders in this field is Intel.

Intel has developed a range of small computers that can be embedded into clothing items including an ear piece called Jarvis and a smartwatch prototype.

“While the promise of wearable computers has been around for a number of years, the ability to make it available in a more mainstream way was demonstrated,” Fadaghi says.

“You can monitor and measure constantly and provide feedback, but it is still early days.”

Feel like checking for heat leaks around your house, tracking your cat once you’ve turned off the lights, or locating that person hiding in the bushes?

You’ll need thermal imaging technology, something that up until now cost thousands of dollars.

Flir Systems unveiled a solution at CES, the Flir One, a thermal-imaging gadget for iPhone 5 and 5S, which is priced at under $US350.

The Flir One slips onto your iPhone’s back and sports both a visible and thermal camera. It has its own battery pack, which can power the device for up to four hours. It also can be redirected to act as a battery backup for your phone.

If you love your smartphone but hate the short battery life iNPOFi has come up with a solution.

At CES INPOFi presented an easy way to charge your phone, offering a range of smartphone cases which allow the iPhone and Samsung Galaxy devices to be charged by a conductive iNPOFi charging board.

When you need some extra power you just lay it on the board and charge it up. The portable charging boards are cheap as well, starting at $US39.99 and increased depending on how much current (in milliamps) the boards provide.