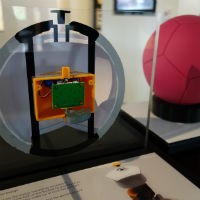 Software vendor Autodesk’s San Francisco headquarters are home to custom car models, a foldable kayak and a basketball that generates electricity among other things.

What these items all have in common, besides being created using Autodesk’s technology, is the lessons they convey about where manufacturing is heading.

Andrew Anagnost, senior vice president at Autodesk, says there are “big disruptions” in the world of making things.

He says this shift is particularly pronounced in SMEs.

Anagnost says custom cars can now be built in a matter of months versus years.

“We are seeing these types of disruptions everywhere,” he says.

Anagnost says there are four major disruptions occurring in manufacturing.

According to Anagnost, disruption is occurring firstly in the way people are designing products.

“We are seeing… the rise of a new generation of people,” he says.

This generation have a “complete and utter comfort” in coming together to work on something temporarily and possibly never physically meeting.

“They are much more open to virtual collaboration,” he says.

“These are people who have hundreds of friends they have never actually met.”

Anagnost says the rise of cloud computing has allowed us to put a super computer behind every designer’s screen giving them capabilities they have never had before.

“In a world of generative design the computer can actually participate in the design process,” he says.

“The designer gets a chance to explore options they may never have explored before.”

Historically if you wanted to build something you had to invest in capital resources but Anagnost says the rise of crowdfunding has changed the game.

“Before people had to pitch their idea to a larger manufacturer or a venture capital firm, now they can pitch it to anyone,” he says.

Anganost says not only is the means of getting funding changing, how people are physically building things is also changing.

In particular, Anganost points to the rise of micro factories.

“These factories are small, robotic and configurable so they don’t have to be offshore,” he says.

Combined with the growing popularity of 3D printing, Anagnost says this is a “paradigm shift” which will benefit SMEs.

“When it gets cheaper and cheaper to deliver a complex product the field gets leveled,” he says.

One example of this democratization of manufacturing can be seen in the Oru Kayak on display at Autodesk.

The Oru Kayak is a seaworthy kayak which folds down into a large rectangle shape.

The creator came up with the idea as he was a kayaker who lives in a small San Francisco apartment.

He used the new manufacturing technology to make 25 prototypes and from this has created a saleable item that is not mass market but can be produced at the scale needed for a niche product.

Anagnost says the new generation of consumers has a different take from the “me generation” of baby boomers.

“The new generation is the make-it-for-me generation,” he says.

“They have this expectation that the product will be more about them and there will be more choices and options for them.”

Anagnost says this make-it-for-me generation cares about how things are made, where they are made and how humanely they are made.

“They are willing to pay more for something that will last longer,” he says.

One example is the New York-based business Normal which makes custom 3D printed earphones which are shaped to fit an individual ear.

“It taps into the desire that customers want to have something made for them, Anangnost says.

Even what constitutes a product is changing according to Anagnost.

“One of the things that is changing is this notion of connectivity,” he says

For example, US small business Uncharted Play created a soccer ball with a pendulum mechanism inside which generates electricity.

Children in the developing world can play with ball for 30 minutes and after that plug in an LED light to the ball and get enough energy for four hours of light.

“When they are connected the customer has another expectation, they expect the product to get better and better over time,” Anagnost says.

He says there are “pretty profound changes” that will play out over the next few years.

“The way things are going to be made five, six ,seven years from now is going to be radically different.”

SmartCompany travelled to San Francisco and visited Autodesk as a guest of SalesForce.