The limitations of big data, according to MailChimp’s chief data scientist: Best of the Web 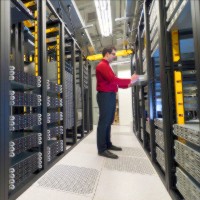 One of the hottest catchphrases in the tech world at the moment is big data.

This is the idea that valuable business insights can be gained from large data sets of information gathered from your business operations and customers.

John Foreman is a highly regarded data scientist who works with the popular mass-mailing service MailChimp. In this article, he warns there are important limitations you need to be aware of when it comes to big data:

There is this idea endemic to the marketing of data science that big data analysis can happen quickly, supporting an innovative and rapidly changing company. But in my experience and in the experience of many of the analysts I know, this marketing idea bears little resemblance to reality.

Over the course of my career, I’ve built optimization models for a number of businesses, some large, like Royal Caribbean or Coke, some smaller, like MailChimp circa 2012. And the one thing I’ve learned about optimization models, for example, is that as soon as you’ve “finished” coding and deploying your model the business changes right under your nose, rendering your model fundamentally useless. And you have to change the optimization model to address the new process.

If big data is one of the big tech catchphrases for business at the moment, Internet of Things is the other. In ComputerWorld, Patrick Thibodeau discusses how one-in-five developers now works on IoT-related projects:

By 2020, professional kitchens, restaurants and other large food providers will be using appliances with sensors and scanners. They will track inventory and provide real-time ordering linked to pricing. Sensors and cameras will be embedded in ovens, refrigerators and even pans and will do things such as track temperatures and ensure food isn’t overcooked or spoiled.

This “connected kitchen,” as Gartner imagines and defines it, will contribute in five years at least 15% in savings in the food and beverage industry.

Building a connected kitchen, and all the other things the Internet of Things (IoT) is promising to deliver, will take a lot of development work. There are signs this development is beginning to happen.

The power of IoT

A key application for IoT is in power utility companies. The New York Times’ Diane Cardwell discusses how internet-connected sensors are making the task of maintaining the power grid easier:

For decades, utility companies have relied on customers telling them when their lights have gone off as a sign that there may be a broader power disruption. The utilities then send workers to drive along mile after mile of power lines, looking for tiny devices — little red circular tabs — that have popped up, signaling the source of the problem in the network.

The Super Bowl and US intellectual property law

Perhaps the biggest event on the US sporting calendar each year is the NFL Super Bowl. And, especially in the digital age, the NFL is cautious to protect its intellectual property rights.

However, this has led to some myths emerging about what is and isn’t permissible under US intellectual property law. It’s a topic tackled by Sherwin Siy in an article on Ars Technica.

For example, there’s a myth that mentioning the Super Bowl in an ad is a breach of the NFL’s intellectual property, leading many advertisers to use the more generic term “the big game”. It’s a point Siy clarifies:

The core purpose of trademark law has always been to identify the source of goods—to make sure that some competitor doesn’t try to pass off its goods as the genuine article. Over the years, that original purpose has been added to and supplemented with other theories, but its fundamental aim remains the same: keeping consumers from being fooled as to whether or not the trademark owner is making or endorsing the person using the trademark without permission.

More to wearables than just telling the time

Finally, over at Wired, Mat Honan argues there’s far more to wearables than just smartwatches, and that a range of task-specific devices are set to come our way:

Wearables are about to explode into an array of novel, single-function devices. They will suit discrete situations rather than peeling off multiple functions from your phone—it’s use-case engineering. Think of activity-specific clothing, like Hexoskin, that monitors workouts. Or medical devices like Vital Connect, a patch that tracks your vital signs and lets doctors access the data. Or earbuds that aren’t quite hearing aids but which you can wear when there’s too much background noise.