The podcast turns 10 years old: Best of the Web 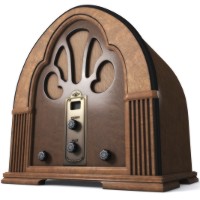 It doesn’t seem that long ago the Apple iPod first came out. So it will probably come as a shock to learn that the podcast, as an online media form, is now celebrating its 10th birthday.

For the few who are still uninitiated, podcasts are episodic series of programs (usually audio) distributed over the internet and often listened to on either a smartphone or portable music player. It’s a format that was synonymous with Apple’s portable media devices.

Cyrus Farivar at Ars Technica decided to take a look back at the 10 year history of this modern-day media form:

If 2004 was the introduction of podcasting to the masses, 2005 marked the year when Apple really started to embrace it. That June, Apple decided it wanted to incorporate the feature of a “podcatcher” directly into iTunes 4.9. While, sadly, that pretty much definitively killed off iPodderX and related applications, it was an enormous breakthrough in terms of reaching audiences. “One thing Apple did do is that they made podcasts ubiquitous,” August Trometer, the creator of iPodderX, told Ars.

The first podcast is not the only significant piece of tech innovation to have a milestone anniversary this week.

It’s now been a decade since Google first listed on the stock market. To celebrate the occasion, the New York Times reposted an article discussing the search giant’s initial IPO.

Of course, back in 2004, many in Silicon Valley still had the ‘90s tech wreck fresh in their minds, and not everyone was sure “this Google thing” was going to be a financial success:

The valley’s digerati, traditionally among the biggest proponents of initial public offerings of technology stocks, are overwhelmingly bearish on Google’s widely anticipated offering, which is expected to get under way soon, through an online auction.

”I’m not buying,” said the Apple Computer co-founder Stephen Wozniak, who has been involved in several start-up efforts since leaving Apple in the early 1980’s. ”Past experience leaves the taste that a few people — never ourselves — will make out the first day, but that it’s not likely to appreciate a lot in the near future or maybe even the long future.”

Here’s a question: If you hire a driver through Uber or a cleaner through TaskRabbit, who is that person an employee of?

Are they temporarily your employee, as the person who hired their services? Should he or she be classified as the employee of the marketplace they sell their services through? Or are they genuinely an independent sole trader?

According to The Boston Globe’s Scott Kirsner, that’s the fascinating and multi-million dollar question currently being examined in a series of test cases in the US. The outcome of these cases will potentially have big implications for the sharing economy going forward:

The worker of the future will not be an employee — at least if some of today’s fastest-growing and best-funded startups have their way. They’re positioning themselves as “technology platforms” that simply connect people with independent chauffeurs, house cleaners, or errand-runners. For the most part, the armies of workers that companies like Uber or TaskRabbit are assembling — often after screening interviews, background checks, and training programs — are treated as independent contractors and receive no benefits.

A class-action lawsuit filed this summer in Massachusetts and California courts is challenging that. The suit asserts that Uber improperly classifies its drivers, who own their cars and use Uber’s smartphone app to get work, as independent contractors. No sick time, no health insurance, no 401(k) contributions.

Meet one of the tech industry’s leading industrial designers

Casey Newton at The Verge has a profile of one of Silicon Valley’s most high profile industrial designers, Yves Behar:

Behar, the renowned industrial designer, is standing in a glass-enclosed conference room at Art Basel, the Swiss art fair, as part of a business trip to Europe… Since moving to California in 1990, Behar has become one of the leading industrial designers of his generation, creating iconic objects for Jawbone, Herman Miller, General Electric, and Puma, among many others. The objects often have a socially progressive bent: light fixtures that promote energy conservation, say, or cheap but durable laptops that offer poor children improved access to education. Behar’s designs tend to be practical rather than flashy, and they have a history of predicting — or dictating — mass-market trends. His design for the Jambox, first released in 2010, launched a multibillion-dollar wireless-speaker market.

Is Xiaomi a cheap knockoff of Apple

Finally, Chinese consumer electronics giant Xiaomi has gained a lot of attention in recent times – and earned more than a few comparisons to Apple. Depending on which marketshare figures you read, it has either just overtaken Samsung in smartphone sales, or come close. But is the company anything more than a cheap knockoff? Over at TechCrunch, Matt Burns has a gallery comparing Xiaomi products to Apple’s.