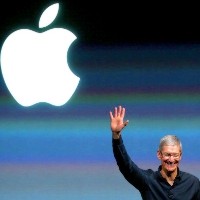 Apple pinned the growth on strong iPhone and Mac sales, as well as an “all-time record performance” of the App Store.

“We are thrilled by the continued strength of iPhone, Mac and the App Store, which drove our best March quarter results ever,” said chief executive Tim Cook.

“We’re seeing a higher rate of people switching to iPhone than we’ve experienced in previous cycles, and we’re off to an exciting start to the June quarter with the launch of Apple Watch.”