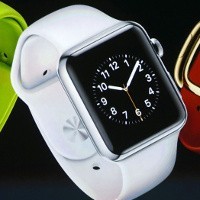 The Apple Watch launches in Australia today, but don’t expect to be able to purchase one in-store.

While Apple’s most enthusiastic customers will receive their watches today, having pre-ordered the device online, the Apple Watch probably won’t be available in-store for purchase until June. What Apple is offering customers who wander into stores today is the chance to try-on the watches. Customers are then encouraged to buy the watch they want from Apple’s online store.

The Apple Watch also presents some interesting problems for developers. The Verge reports while Apple did invite developers to trial sessions with the watch, the majority are releasing apps they don’t have much experience actually using.

A number of Australian businesses have released apps for the Apple Watch, including Air Service, AirTasker, Domain, the Commonwealth Bank, Invoice2go, Fairfax, Qantas, Woolworths and Westpac.

“A slight vibration and a flick of the wrist makes it the perfect interface for people to be ‘always on’ without being too rude and pulling out your phone during a meeting,” Lui says.