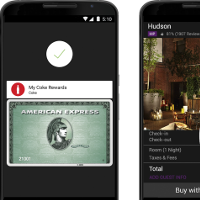 Google has unveiled Android Pay, a feature that enables Android phone users to pay for purchases in apps or in store with the tap of a button.

Much like Apple’s Apple Pay feature, Android Pay will allow Android users to pay in physical stores by unlocking their phone and placing it near a merchant’s terminal, in the same way Mastercard’s PayPass and Visa’s Paywave works for credit and debit cards.

“So we’ve approached Android Pay the same way we approach every other part of the Android family – partnering with the ecosystem – bringing together mobile carriers, payment networks, banks and retailers to deliver you choice and flexibility. And offering developers an open platform to collectively push mobile payments forward,” Bhat said.