Microsoft Lumia smartphones land Down Under 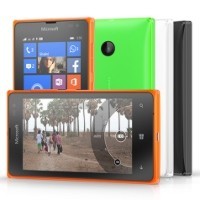 The Lumia 435 and Lumia 532 are Microsoft’s entry in the low-end smartphone market. Priced at $129 the Lumia 435 includes a 1.2Ghz dual core processor and 1GB of on-board RAM, built-in Skype integration and a front-facing camera.

Windows Central’s Richard Devine describes it as a “cheap, capable” smartphone that’s well-built and compact, but says its camera suffers from the price point.

The Lumia 532 costs $149 and packs a 1.2GHz quad-core processor, a five megapixel front-facing camera, and 1GB of RAM.  Both phones feature Windows 8.1. and virtual assistant Cortana.

Steve Lewis, general manager of Microsoft devices in Australia and New Zealand said in a statement Microsoft has been working to bring smartphone innovation to more accessible price points.

“The Lumia 435 and Lumia 532 appeal particularly to those looking to buy a smartphone for the first time, both incorporating an operating system that is intuitive and deeply personal,” Lewis said.

What Lewis means when he describes an operating system as “deeply personal” is anyone’s guess, but it doesn’t really matter, the price point is what the company hopes will sell these phones.

“With the launch of these devices we are bringing more consumers the best of Microsoft by providing all the core smartphone features, the latest Windows Phone software, hundreds of thousands of apps and Microsoft’s industry-leading services – all at an incredible price,” he says.