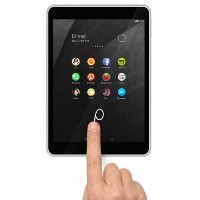 Nokia has made a surprise return to the mobile devices market, launching a new and affordable tablet overnight.

In a surprise announcement, Nokia revealed the N1 device, the first Nokia-branded Android tablet, which will retail for $US249 ($269) before taxes.

The tablet is the brand’s follow up to its Microsoft collaboration, the Lumia 2520, released last year.

The N1 design looks similar to Apple’s iPad mini, with a 7.9 inch screen and thin 6.9mm aluminium-framed body. Unlike the Apple device, however, it will run the Android Lollipop operating system.

Nokia said it will not manufacture the tablet itself, but will license its brand, design and software to a third-party, the Taiwanese technology group Foxconn.

It certainly won’t be available for a last minute Christmas present though. Nokia said the device will be launched in China early next year, with the company saying it has an “anticipation of expanding sales to other markets”.

“We are pleased to bring the Nokia brand back into consumers’ hands with the N1 Android tablet, and to help make sophisticated technologies simple,” said Sebastian Nyström, head of products at Nokia Technologies.

“The N1 has a delightfully intuitive interface and an industrial design to match it. This is a great product for Nokia fans and everyone who has not found the right Android tablet yet.”