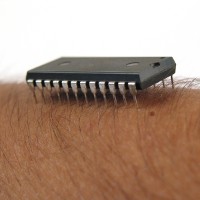 With the rise in popularly of wearable tech, you may have just become used to the idea of your customers paying with the tap of their wrist – but what if they weren’t even wearing a watch?

A survey by Visa has revealed one in four Aussies would consider inserting a microchip under their skin to pay for goods and services, according to The Australian.

The survey, conducted by research firm UMR, interviewed 1000 Australian consumers and found 25% were “slightly interested” in having a commerce-oriented chip implanted in their skin.

The technology for a subcutaneous chip already exists, according to the report, with US firm VeriChip having created a tiny antenna that sits just below the skin more than a decade ago.

Each chip, with its own unique identification number, is implanted in the soft tissue between the thumb and index finger and then detected by a radiofrequency identification (RFID) scanner.

The research, which was released in conjunction with the University of Technology Sydney to explore the future of wearable technology, also showed 32% of respondents would be interested in paying with a smartwatch, 29% with a smart ring, and 26% with smart glasses.