Samsung in peace talks with Microsoft over patent battle 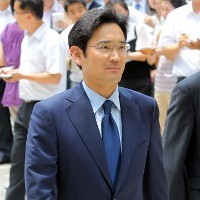 “The two agreed to peace talks over ongoing patent disputes, and to expand their business partnership,” a Samsung official said.

Microsoft filed a contract lawsuit in the Southern District of New York against Samsung earlier this year claiming Samsung breached an agreement to share patents, which had ended in 2011.

Microsoft sought to reclaim unpaid interest on its patent royalties.

The Korea Times is reporting “working-level discussions have recently been underway” between the Korean smartphone maker and Microsoft to resolve the dispute, as both tech titans see each other as allies in face of competitors such as Apple and Google’s Android.

“The key point is that Microsoft still hopes to continue its long-time partnership with Samsung over the coming decades,” the Samsung official said.

Nadella was in Korea for a short two-day trip, but The Korea Herald reports he and Jay-yong (the heir to the Samsung fortune) also discussed the possibility of future collaboration.

Samsung has previously been in a long-running patent battle with Apple over smartphone designs, although those lawsuits were dropped last month.