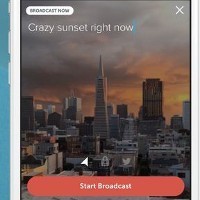 The app, which Twitter purchased in January last year, allows its users to live stream video, audio, and their location with anyone they want. Start a live stream and followers are notified, either by a Tweet, or a notification via the Periscope app. Viewers can engage with broadcasters by sending messages and “hearts”.

Its functionality is very similar to Meerkat, a live video streaming service that would automatically tweet when video went live. Earlier this month ahead of the launch of Periscope, Twitter cut off Meerkat’s ability to import people’s social networks from Twitter.

In a blog post announcing the launch of Periscope the startup said it wanted to build the closest thing to teleportation.

“While there are many ways to discover events and places, we realised there is no better way to experience a place right now than through live video,” the statement said.

“A picture may be worth a thousand words, but live video can take you someplace and show you around.

“Where you’re witnessing your daughter’s first steps or a newsworthy event, Periscope offers an audience and the power of a share experience.”