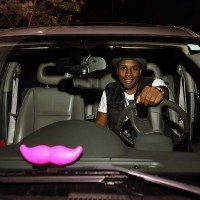 Ride-sharing startup Lyft has raised $US530 million ($A688 million) in Series E funding.

The round was led by Japanese e-commerce business Rakuten, which invested $US300 million in return for an 11.9% stake in the startup. That puts Lyft’s valuation at around $US2.5 billion.

In a statement, Lyft said the funding will be used to deepen its US footprint, hire staff, develop technology, and expand its carpooling service Lyft Line.

While Lyft competitor Uber has aggressively expanded internationally, Lyft is only available in the United States. There’s no indication from the company itself that Lyft’s cars and their distinctive pink moustaches might be seen outside the US, or in Australia, anytime soon. However, Rakuten said the funding round will enable Lyft to grow its service and “invest in both domestic and overseas expansion”.

“By empowering human connection, the sharing economy is going to fundamentally transform the service industry and benefit society,” Mikitani said.

“We believe businesses like Lyft that unlock the latent potential that exists in people and society hold the key to the future.”