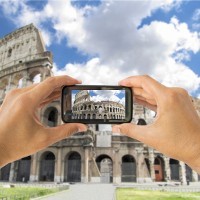 Telstra says it wants to end the days of massive international roaming phone bills with the introduction of its ‘Travel Passes’ deal.

The move is a response to rival Vodafone’s $5 roaming offer announced in March, as well as the slew of free calling apps such as Skype and Viber.

Telstra’s Travel Passes deal allows customers to make and receive unlimited calls to and from standard numbers, send unlimited text messages and use an included data allowance while overseas.

Travel Passes are available in more than 40 popular holiday destinations, which are split into two zones. Zone one includes Australia’s favourite Oceanic holiday hotspots New Zealand, Thailand and Indonesia (yes, including Bali). Zone 2 includes the US, Canada and various destinations in Asia, Africa, Europe, the Pacific Islands, the Middle East, South America and the UK.

For businesses on the go, the pre-paid product could be a good way to keep track of and limit your team’s spending when travelling for work.

“Our customers told us that they wanted better value international roaming options and pricing that is easier to understand. We’ve acted on this feedback by introducing new Travel Passes that take the guess work out of using a Telstra mobile overseas,” said Scott McGibbony, director of Telstra Mobile, in a statement.