What the Fire Phone fiasco means for Amazon’s future: Best of the Web 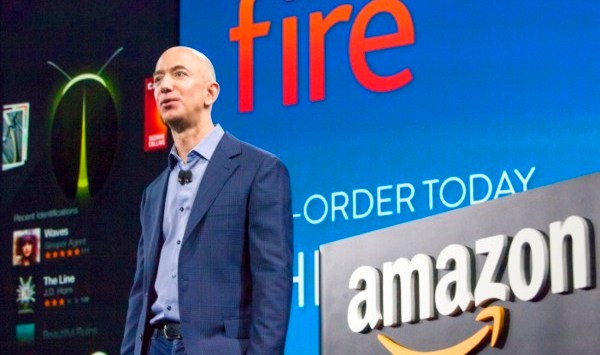 In business, you sometimes have to take risks, and those risks don’t always pay off.

A recent example is Amazon’s recent attempt to tackle the likes of Samsung, Motorola, HTC, Nokia/Microsoft and Apple in the smartphone market.

At an event on June 18 last year, the online retail and cloud computing giant confirmed rumours it was working on its own smartphone, following the success of its popular Kindle and Kindle Fire e-book readers and tablets.

The device, dubbed the Fire Phone, included an advanced image recognition system that allowed you to take a photo of any object and then buy it online from Amazon. Another much hyped feature was its unique 3D display.

But despite the hype and anticipation, the device is widely seen as a flop in the marketplace. Over at Fast Company, Austin Carr examines where it all went wrong:

It is a cold day in early December in Midtown Manhattan, and Amazon CEO Jeff Bezos has barely taken his seat on stage when his interviewer throws out that brusque query. It’s the question on the lips of every one of the 400 attendees of this tech conference, but it’s still a jarring moment. Bezos tries to hem and haw his way out of the issue, but his interrogator, Business Insider editor-in-chief Henry Blodget, won’t let up, asking again, “So, Jeff, what happened with the Fire Phone?”

Introduced with grand ambitions last summer, the Fire Phone is widely seen as a fiasco. Originally priced at $199 (with contract) and intended as an iPhone competitor, it now sells for 99 cents, and Amazon has taken a $170 million write-down largely attributable to unsold Fire Phone inventory. Yet Bezos finally answers the question with the kind of reasoning that investors, customers, and pundits have come to expect from him: Amazon is going to pour more resources into its phone. Defending the Fire Phone as a “bold bet,” Bezos argues that it’s “going to take many iterations” and “some number of years” to get it right. In other words, just as it did when it expanded beyond books in the late 1990s, and when it introduced the Kindle and started its cloud-computing wing, Amazon Web Services (AWS), in the mid-2000s, Amazon is going to invest in its future, short-term shareholders be damned. It’s the kind of answer that has served Bezos well over the years, that has helped justify the fact that the company has produced so little profit even as it has grown into the behemoth of e-commerce.

When it comes to executives in Silicon Valley, few have a higher profile than Yahoo! chief executive Marissa Mayer. And certainly, in the two years the senior former Google engineer and executive has been at Yahoo!, the company’s performance has come under the spotlight.

Unfortunately, in recent times, not all the attention has been positive. In an extensive profile over at the New York Times, Nicholas Carlson examines Mayer’s attempt to revitalise the flailing tech giant, and one of its harshest critics:

Eric Jackson was sitting in his hotel room on Sea Island, Ga., watching his kids splash around in the pool, when he clicked “publish” on his latest blog post for Forbes.com. Jackson, an influential hedge-fund manager, had become fixated on Yahoo and the efforts of its chief executive, Marissa Mayer, to turn around the enormous yet floundering Internet company…

A day after his post, Jackson received an unusual email. A major Yahoo shareholder had written to explain that he and many other investors, along with numerous employees and advertisers, had themselves become extremely frustrated with Mayer. Her turnaround plan, he said, had failed. The start-ups she acquired (most notably the social blogging platform Tumblr, which Yahoo bought for $1.1 billion in 2013) had failed to revive the company’s flat revenues of roughly $5 billion per year. Nor had Mayer succeeded, despite her track record overseeing Google’s search engine, in turning any of Yahoo’s many products into an industry leader.

Recently, app developer Marco Arment went viral with a blog post about how Apple’s software had lost its way. The piece quickly went viral, being picked up by respected business publications, including Business Insider.

Apple’s hardware today is amazing — it has never been better. But the software quality has fallen so much in the last few years that I’m deeply concerned for its future. I’m typing this on a computer whose existence I didn’t even think would be possible yet, but it runs an OS with embarrassing bugs and fundamental regressions. Just a few years ago, we would have relentlessly made fun of Windows users for these same bugs on their inferior OS, but we can’t talk anymore.

“It just works” was never completely true, but I don’t think the list of qualifiers and asterisks has ever been longer. We now need to treat Apple’s OS and application releases with the same extreme skepticism and trepidation that conservative Windows IT departments employ.

But Arment followed up the post with this piece on why he regretted posting his original article:

This morning, my words were everywhere, chopped up and twisted by sensational opportunists to fuel the tired “Apple is doomed!” narrative with my name on them. (Or Tumblr’s name, which was even worse.) Business Insider started the party, as usual, but it spread like wildfire from there. Huffington Post. Wall Street Journal. CNN. Heise. Even a televised CNBC discussion segment.

The missing piece of the smart home revolution

In recent times, the Internet of Things (IoT) – the trend towards connecting a range of different appliances to the internet – has gained a lot of media attention. However, as Dylan Love warns at The Kernel, there’s a missing piece of the puzzle:

Despite the oft-mocked naming scheme, the Internet of Things (IoT) has an incredibly practical goal: connecting classically “dumb” objects—toasters, doorknobs, light switches—to the Internet, thereby unlocking a world of potential. Imagine what it means to interact with your home the same way you would a website, accessing it without geographic restrictions to lock and unlock your doors, adjust the thermostat, or even identify where people are in your house.

This of course has huge implications for consumers and businesses alike. Entrepreneurs are already cashing in on what will inevitably become a mainstay of the modern home—automated sensory technology that enables you talk to and customize your living space in new and intriguing ways. The Internet of Things, when it delivers to the fullest, finds ways to make you even more comfortable in the space you already call home.

Are we about to see sub-orbital planes? Think again

Ever since the first Concorde took off, the dream of supersonic space-age passenger travel has been alive and well.

With the advent of commercial space flight from companies such as Virgin Galactic and SpaceX, it seemed technology was set to make sub-orbital supersonic space flight a reality.

However, prominent science fiction writer Charlie Stross has poured a big glass of cold water on the viability of the concept, saying it is unlikely to become economically viable anytime soon:

One of the failure modes of extrapolative SF is to assume that just because something is technologically feasible, it will happen: I’m picking on sub-orbital passenger travel as an example of this panglossian optimism because I got sucked into a thread on Twitter the other day and I think it’s worth explaining my objection to it in a format that permits me to write more than 140 characters at a time.

The proximate cause of my objection was someone asserting that Virgin Galactic’s business model is ultimately targeting sub-orbital flights between continents, rather than brief bouts of free-fall tourism for the rich. At first glance, this isn’t an obviously stupid assertion: enough folks have signed up for the sub-orbital tourist package that there’s clearly demand, various companies have been buying patches of isolated terrain as sites for spaceports (even in Scotland), and there’s a British start-up proposing to build an air-breathing hypersonic carrier craft for satellite launches and passenger travel. It’s a perennial dream technology that keeps coming back from the dead, because the idea of flying from Heathrow to Sydney in three hours instead of 22 is obviously appealing to those of us who occasionally fly LHR-SYD.

Except … it’s bunk. Let me explain why.

A few drinks at the museum

Finally, a trip to a science museum has been a common excursion destination for many Australian students over the years. But the Hamilton Spectator’s Clare Clancy reports some science museums have begun to target an older client base, linking a vat of bubbles with a glass of bubbly:

Giggling and enthusiastic conversations emanate from the bubble exhibit at the Saskatchewan Science Centre, suggesting that the centre has been successfully transformed into a playground for adults.

Setting down their wine glasses, two visitors bathe large circular rings in soap and strategically move them through the air to create massive bubbles. It’s a far cry from the bubble-blowing reminiscent of kindergarten.

On another day, the exhibit might be swarmed with children on a school field trip, but on adult science night, visitors aged 19 and older are the ones to boast a look of wide-eyed amazement.