Why Apple is getting rid of the queues outside its stores: Best of the Web 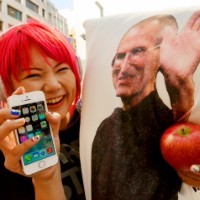 It’s one of the great rituals in the tech industry. In the days leading up to the launch of a new Apple product, whether it’s a new iPhone, iPad or MacBook, loyal customers queue at their nearest Apple Store to be among the first to get their hands on the new tech gadget.

However, according to a leaked memo obtained by Jim Edwards of Business Insider, Apple wants to consign the launch day queues to history:

Apple retail chief Angela Ahrendts is trying to usher in a new way for the company to handle product launches. She wants to encourage customers to avoid their local Apple Store when the Apple Watch goes on sale and instead order online, according to instructions she sent to store staff obtained by Business Insider.

“This is a significant change in mindset, and we need your help to make it happen,” the memo says (see the text and imagery below).

The memo is interesting because it suggests that the publicity Apple’s stores normally enjoy on product launch days — when customers line up for hours or days ahead of a new iPhone launch — isn’t entirely welcome at the company.

So why is Apple doing it?

At The Verge, Jacob Kastrenakes speculates it could be because Apple is keen to ensure its brand remains upmarket:

The gist of the memo isn’t simply that Apple’s retail stores are going to have low supplies of these two new products, it’s that Ahrendts is trying to make Apple’s stores into something a bit classier. Apple has long gained publicity for having people wait in lengthy lines for hours — if not days — in front of its store for new iPhones. While that’s generated a nice camaraderie for the brand, it certainly doesn’t leave an impression of Apple as a high-end, classy fashion company. That’s what Apple has been going for while selling the Watch, and that’s the world Ahrendts comes from: her former position was CEO of Burberry.

It’s a strange shift, too, that seems to be transforming Apple Stores from actual stores into showrooms. It’s unclear if this trend will continue with future product launches — we’ll really see what Ahrendts is planning if this continues with the iPhone — but for now, Apple very much wants people to check out its new products in stores and then go home to buy them (and then wait for them to arrive).

You might remember late last year, following the launch of the iPhone 6, there were a series of stories about how users were (accidentally or otherwise) bending their new devices.

To the surprise of some, it emerged that aluminium is a very malleable metal and that a large, thin object made out of it could potentially bend. At the time, Apple’s largest rival, Samsung, took great delight at making fun of its rival’s misfortune.

Fast forward a few months and Samsung has released its latest flagship smartphones, the Galaxy S6 and S6 Edge. The company did away with many features, such as removable batteries, waterproofing and plastic covers, in favour of a thin, aluminium design. (Gee, I wonder who gave them that idea.)

Unfortunately, as Forbes’ Gordon Kelly reports, the South Korean tech giant ended up copying Apple in one way they probably never intended: Just like the iPhone 6 Plus, the S6 Edge bends with just 49 kg (110 pounds) force, far less than the 68 kg force it takes to bend a Galaxy Note 3.

Needless to say, Samsung’s attitude to the latest bout of bendgate is a little different to last time:

Late last week extended warranty provider SquareTrade applied pressure to the Galaxy S6 Edge and found it not only bent at 110 pounds of pressure (lbf), but that under this strain the screen shattered. It concluded that for Samsung fans this means “Instead of a bent phone, they may have a pocket full of glass.”

Unsurprisingly Samsung fired back. It did not dispute SquareTrade’s results, but claimed 110 lbs of pressure is extreme when “the normal force generated when a person presses the back pocket is approximately 66lbf.”

What did Samsung find? “Our internal test results indicate that the Samsung Galaxy S6 and S6 Edge are not bendable even under 79lbf (32kgf), which is equivalent to putting pressure to snap a bundle of five pencils at once.” SquareTrade wasn’t impressed.

Abandoning the PC for the mobile-first internet

One of the most profound tech changes of the last few years has been the rise of the mobile-first internet. Increasingly, the default device for internet users is their smartphone, rather than a desktop or laptop computer.

So it’s interesting to read, in The Atlantic, that as many as one-in-five internet users have ditched the PC or Mac altogether, and now rely solely on their smartphones to access the internet:

The idea that new Internet users will come online on smartphones rather than computers is now well established. But it is often assumed that this population is composed entirely of people from the world’s poor countries. A new report from Pew punctures that assumption: It turns out that one in five American adults access the Internet primarily from their smartphones.

Finally, from peanuts to papayas and pollen to perfume, millions of Australians suffer allergic reactions when exposed to one substance or another. The symptoms range in severity from mild discomfort to sudden death from anaphylactic shock. But what causes these reactions?

Over at Ars Technica, Carl Zimmer takes a look at the latest scientific research on allergies and the role played by a substance called IgE, which could potentially be measured by wearable devices in the future:

One summer afternoon when I was 12, I ran into an overgrown field near a friend’s house and kicked a hornet nest the size of a football. An angry squadron of insects clamped on to my leg; their stings felt like scorching needles. I swatted the hornets away and ran for help, but within minutes I realized something else was happening. A constellation of pink stars appeared around the stings. The hives swelled, and new ones began appearing farther up my legs. I was having an allergic reaction.

Anyone with an allergy has their origin story, a tale of how they discovered that their immune system goes haywire when some arbitrary particular molecule gets into their body. There are hundreds of millions of these stories. In the USA alone, an estimated 18 million people suffer from hay fever, and food allergies affect millions of American children.

We might have more effective treatments if scientists understood allergies, but a maddening web of causes underlies allergic reactions. Cells are aroused, chemicals released, signals relayed. Scientists have only partially mapped the process. And there’s an even bigger mystery underlying this biochemical web: why do we even get allergies at all?