Why Snapchat turned down Facebook’s billions 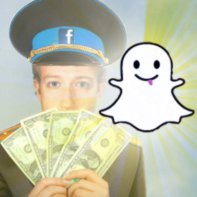 Facebook last week was reported to have offered US$3 billion to acquire the Snapchat social network service – an offer that was rejected.

The hefty buyout offer (maybe strategically leaked by Snapchat) tells us quite a lot about online demographics, business models and valuation.

But why would Facebook offer that astronomical figure for a service that doesn’t make any money – and why would Snapchat say no?

Snapchat is a California-based online service that has yet to make a profit. It apparently isn’t desperate to bring in revenue in the near future, although when it does it is likely to follow the standard model of presenting its users with advertisements and providing data to partners for strategic marketing.

Snapchat is a free service. It enables users to make photos and videos with smartphones, annotate them – there’s nothing like a caption to enliven a “selfie” – and send the images to friends.

That service isn’t particularly novel: Snapchat’s competing with several image services (including Instagram, which was acquired by Facebook last year for US$1 billion).

The attraction of Snapchat for a core market of young people is that access to the “snaps” is transitory. They supposedly disappear after a set period of time (between one and ten seconds).

It’s been shown that the “catch it while you can” feature can be subverted. Some consumers are technologically naive, don’t care or indeed welcome the risk.

Scope for being naughty attracts some demographics who are disenchanted by Facebook as mainstream – the sort of space occupied by staid law academics – and overly commercialised.

Three billion? Thanks, but no

Why have Snapchat’s owners – its executives, staff and private equity investors – turned down the offer? We don’t know.

It could be that they are influenced by a sort of digital machismo. There is kudos in saying no to very large sums of money, particularly money offered by an enterprise that is derided and unloved. The history of Silicon Valley indicates that ego is often important.

The refusal could be more prosaic. Snapchat can afford to turn down the offer and wait for a higher figure. The US$3 billion, if indeed on the table, validates the hopes and aspirations of Snapchat’s owners. Yes, the company isn’t making money but many of the most valuable “new media” enterprises lost money year after year while they were busy growing.

Snapchat’s investors were happy to provide support on the basis that eventually the shareholders would be swimming in revenue rather than red ink and that lenders would be able cash out with a major premium.