Will Pebble survive against the Apple Watch and Android Wear? Gadget Watch 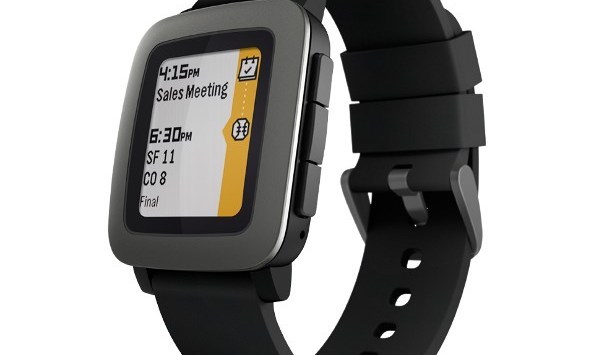 Back in 2012, Pebble’s founders hit the jackpot when the smartwatch pioneers put their first device on Kickstarter. Soon the funding poured in well past its $100,000 goal – in two hours, no less – and topped a massive $10 million.

The watch worked with both Apple iOS and Android devices, with a growing list of third-party apps from its own app store.

Since then, the category the company has created has become significantly more crowded. Its competitors now include Samsung’s Galaxy Gear, Google’s Android Wear and, of course, the Apple Watch.

Last month, Marin Tchakarov, the chief financial officer at Pebble, told SmartCompany he isn’t worried about the new entrants into the market.

They’re certainly fighting words. But how competitive is Pebble’s latest device, the Pebble Time? It’s time to find out.

The key feature of Pebble Time, when compared to its many rivals, is its battery life. Pebble claims the device has a battery life of up to seven days between charges, while most of its rivals struggle to make it through one.

It features a 1.25-inch, color e-paper display with an LED backlight, and 30-metre water resistance.

While the Apple Watch, LG’s G-Watch Urbane and Asus ZenWatch far exceed the Pebble Time in the style department, Nicole Lee at Engadget confirms the long battery claims made by Pebble:

If you’re looking for a stylish fashion-forward smartwatch that can double as a luxury timepiece, look elsewhere. With its square display, polycarbonate shell and wide silicone bands, the Pebble Time is decidedly more geek than chic. Yet, the Time has a charm all its own, with a casual, sporty look that I rather like. Sure, it’ll probably look out of place at a fancy cocktail party, but for a simple everyday watch, I think it’s alright.

The real differentiator between the Time and the original Pebble, however, is the display — it’s now in color. But instead of going with an OLED panel, Pebble opted for a color e-paper display. Yes, this means that the screen isn’t quite as bright and luminous as the Apple Watch and most Android Wear devices. The colors of e-paper are also a lot more muted than what you would see on an OLED display. But e-paper gives the Time a few significant advantages.

For one thing, the display is on all the time; there’s no need to press a button or flick your wrist to see what time it is. The 2.5D Gorilla Glass display is also very readable even under really bright sunlight, which isn’t what we can say about some of the other smartwatches. If you do want the display to be brighter, there’s an LED backlight that you can turn on momentarily, but there’s unfortunately no backlight timer to make it last longer than a few seconds. The biggest advantage, though, is battery life. While the Apple Watch and Android Wear devices might manage a day or two on a charge, the Time is slated to last up to seven days before running out of juice.

Gizmodo’s Sean Hollister notes that Pebble has taken a far simpler approach to its design than the other platforms:

Apple and Google are promoting powerful wrist-computers that run cut-down versions of full smartphone apps. Pebble thinks differently. The new Pebble Time doesn’t feel much more powerful than a high school graphing calculator. But because of that, it (allegedly) lasts up to a week on a charge instead of just a day or two. And perhaps more importantly, it’s dead simple to use.

Hollister goes on to say this makes the Pebble Time a far simpler device to use than its rivals:

From your watchface, you simply press the up and down buttons to move forwards and backwards in time. Go forward, and you’ll see your upcoming calendar events, alarms, and reminders, plus morning and evening weather reports. Go back, and there are your missed calls, your previous alarms (when did I wake up this morning?) completed goals and so on. You can go up to two days in either direction.

The wonderful thing about Pebble is that you always know where you’ll find what you want. By contrast, Google Now throws cards at you out of the blue, suggesting information it thinks you’ll like — sports scores, local check-ins, etc. Swipe them away, and they will vanish, never to be seen again. Apple hides its information in Glances and inside apps, and it’s a chore to navigate through. But with Pebble, those sports scores are right there in your Timeline at the time they arrived. Just scroll up to find them.

Ewan Spence at Forbes points out a few of the device’s drawbacks:

Don’t expect a bright and vibrant display that’s comparable to the battery-hungry OLED screens in the Apple Watch or Android Wear devices. Pebble is still using an eInk style screen – it’s just that the screen technology used now can accommodate 64 colors. It still retains the low power requirements, but pushes the UI possibilities much further than the black and white display of the older model.

There are two gotchas though. The first is that the screen is not always as clearly contrasted so you can make out the display when the backlight is off. And when the backlight does kick in, it’s not as bright as the original Pebble screens, and the Pebble Time remains a slightly murky viewing experience. Yes the display of the original Pebble watches were monochrome, but they were always-on displays, and they were always clear to make out. The Pebble Time has dulled that selling point and replaced it with ‘look, color!’ Unlike the timeline changes, the addition of color and the compromises that comes with it is one I can agree with, but I wish the Pebble had beefed up the luminosity of the backlight a few more lumens.

Finally, Nathan Olivarez-Giles of The Wall Street Journal says that – for Android smartphone users – Pebble has built a better smartwatch than Google:

This might come as a surprise, but the best smartwatch for Android users wasn’t developed by Google. For now, that honor goes to the Pebble Time, the latest from the company that pioneered the idea of a wristwatch for smartphone notifications.

If the Apple Watch is a Tesla, the Pebble Time is a Toyota. The question is: Can people be happy with a simple smartwatch when there are more advanced, albeit complicated, ones? Right now, Android owners looking for a watch should focus on Pebble, but if Google ever gets its act together and streamlines the Android Wear user experience, Pebble’s days could be numbered.

When it comes to smartwatches, be they Android Wear, Apple Watch or Galaxy Gear, there are a few recurring concerns. The main ones are battery life, and how fiddly most of them are to use.

Pebble’s simpler approach fixes both of these issues.

However, my main concern with buying one, given the consumer electronics and tech giants it’s up against, is the uphill battle the company faces in the marketplace.

Sure, in many key ways the technology is superior. But so too was the Commodore Amiga in the 1980s – and that got squashed by the competition.