There’s a huge pool of talented women working in artificial intelligence in Australia, making essential contributions and leading on key innovations in this booming industry — so the Australia and New Zealand Women in AI Awards were always going to be competitive.

With an impressive lineup of finalists in a mix, the winners of these awards have been named, including a broad range of work and industries highlighted across the list.

Gender equality in AI has been identified as a key priority area by the World Economic Forum, given the absolute necessity for diversity among the teams creating this tech.

As such, these awards highlight and elevate key female talent in this space, celebrating the work of nominees and finalists to inspire more women and girls into the field and to also ensure such contributions get the spotlight they deserve.

“This room is just the start,” said presenter Catriona Jackson, the chief executive of Universities Australia.

The Grand Award — for the Women in AI Innovator of the Year — went to  Jamila Gordon, chief executive and founder of Lumachain, who also took home the AI in manufacturing award. She told the audience that the awards will encourage more women and girls into AI, and encouraged everyone in the room to make that mission a priority.

The second runner up for the award went to Fiona Turner, co-founder and chief executive of Bitwise Agronomy.

And the first runner up went to Dr Michelle Perugini, co-founder and chief executive of Presagen. 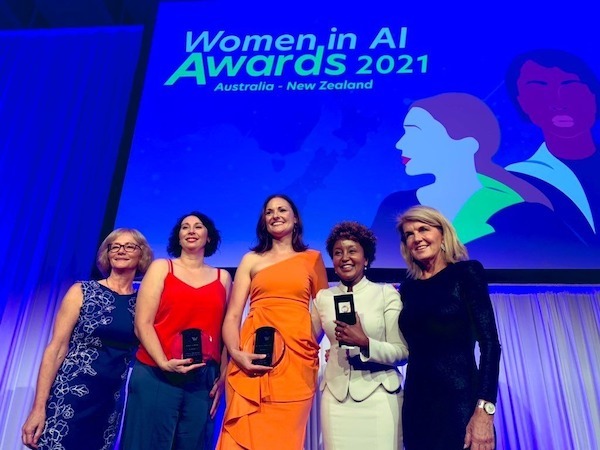 The winners of the Women in AI Awards. Source: Women’s Agenda.

Speaking at the event, prior to this week’s Cabinet reshuffle, Minister for Industry, Science and Technology Karen Andrews said the industry must creative an inclusive culture in AI.

“As you know, the challenge is not a lack of talented and inspiring women in STEM. Ensuring women are supported to thrive in AI, and celebrating them to inspire our next generation of women, is where more action is needed,” she said.

Also speaking at the event, Australian Chief Scientist Cathy Foley said: “It is important to raise the profile of amazing women in future technologies, to have a truly diverse workforce. A diverse workforce equals diverse solutions.”

Closing the gap: Why are big companies still getting away with not reporting their gender pay gaps?

New research on the gender pay gaps of nearly 5000 companies shows that while the full-time wage disparity has fallen to 20.1% from 24.7% in the last seven years, it is likely to take another 26 years for it to close completely.

“An army of clones is a predictable foe”: The importance of diversifying your cybersecurity team