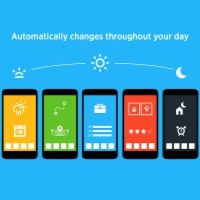 Using machine learning and data mining, the app automatically displays the apps and information it anticipates a user needing at any given moment, which is updated throughout the day.

The app also automatically organises apps based on their function and presents users with a list of their favourite contacts.

The launcher, which is now available on Google Play, is optimised for Android 4.0 and later, and is not compatible with Android 2.3 Gingerbread.

Aviate is based on technology Yahoo acquired through a takeover of a startup called Incredible Labs, which it purchased in late January.

Incredible Labs had previously created as assistant app called Donna, which was shut down following the purchase.

The news sees Yahoo join a number of other tech giants, such as Mozilla and Facebook, as well as a number of smartphone manufacturers, which have launched their own replacement app launchers for Android.