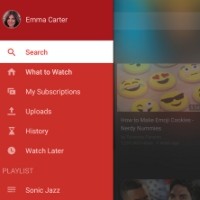 Google is preparing to roll out a major update of the YouTube app for smart TV devices, continuing a push by the tech giant into the television market.

The update will see the TV version of the app introduce a menu that appears on the left-hand side of the screen, in a manner similar to its official app for smartphones and tablets.

In a statement, Google said the change is designed to make it easier for users to access key features, such as the latest videos from channels they subscribe to, as well as search for clips or browse for recommendations.

For content creators, the change also means smart TV viewers will now be able to see channel pages directly from their TVs.

The update will initially roll out to users of the Xbox One, and from there will be rolled out to other streaming video devices and set top boxes.

It comes after the tech giant highlighted a new smart TV platform at its Google I/O developer conference earlier this year, called Android TV, as well as a major upgrade to its ChromeCast streaming media stick.